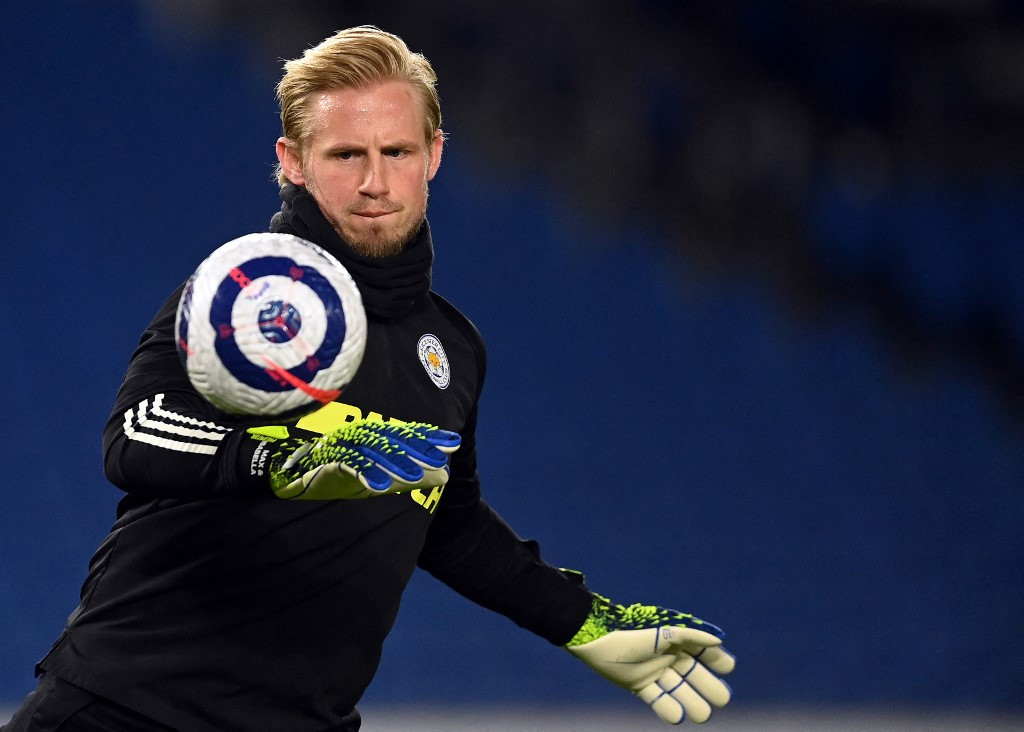 Kasper Hjulmand replaced Age Hareide as Denmark coach last year after Euro 2020 was delayed by the Covid-19 pandemic Kasper Schmeichel has his boots planted firmly on the ground but the 34-year-old Denmark goalkeeper dreams of repeating his father’s sensational Euro 1992 title.

“You’ve got to dream big … and the question we’ve got to ask ourselves is ‘Why not us?'” the keeper recently told Danish TV2.

His father Peter was the hero of Denmark’s unexpected European championship victory in Sweden almost 30 years ago. With his 129 caps from 1987 to 2001 and long career with Manchester United, Peter Schmeichel is a living legend.

Kasper Schmeichel — tall, blond and strapping like his father — has made a name for himself as well.

Since 2011 he has played for Leicester, the surprise 2016 Premier League champions, and registered 60 caps for Denmark, including a brilliant performance at the 2018 World Cup.

As he approaches the end of his career, he hopes to fulfil his boyhood dream of winning the Euro, after Denmark, currently ranked 10th in the FIFA standings, failed to qualify in 2016.

“When you’re little and you play football, what do you dream of, playing or winning? Obviously, you dream of winning!” he said with a smile.

“We’ve got a good team, I think. And we’ve racked up some good results and good showings in the past few years,” he added.

“When you look at the results that we can achieve when the pressure is on, we have every reason to be optimistic.”

But apart from the fact that Denmark are not a favourite and that there will be a Schmeichel standing between the posts, there are not many similarities with 1992.

READ ALSO:  Real Madrid “no longer had faith” in me – Zinedine Zidane

Back then, Denmark — called up at the last minute after Yugoslavia were excluded over the war in the Balkans — were not at all prepared and managed to turn their relaxed approach to triumph.

There’s no need for the squad to feel the shadow of 1992 hanging over them, Poul Ferdinand, sports reporter at daily Ekstra Bladet, told AFP.

“Before the Euros in 1992, the team wasn’t playing very well, there were conflicts with management. Today it’s different, the team is strong and well organised,” he said.

Schmeichel, who grew up and played his entire career in the shadow of his father’s exploits, agreed, saying there’s no reason to feel intimidated by the past.

“The surname’s definitely not been a help, that’s for sure, but it’s got no relevance to me at all,” he told the BBC several years ago.

“That’s my name, I’ve always fielded those questions from the media, but I just get on with it.”

“I think it would be easier to play a different sport.”

Denmark finished second in their qualifying group behind Switzerland but ahead of the Republic of Ireland, going undefeated while scoring 23 goals and conceding just six in eight games.

“The style has changed a bit” in recent years, said Ferdinand.

At the 2018 World Cup, Denmark’s play was lacklustre but solid, enabling them to advance to the round of 16 where they fell to eventual runners-up Croatia on penalties despite Schmeichel’s heroics.

“It should be extremely difficult (for our opponents) to score … but at the same time we have to increase our ball possession closer to our opponent’s goal,” Hjulmand said ahead of the Euro.

In addition to Schmeichel, Denmark will be counting on the experienced defender and team captain Simon Kjaer as well as midfielders Christian Eriksen and Pierre-Emile Hojbjerg.

Home fans will play their part too, as the Danes will stay in Copenhagen for their three Group B matches, meeting Finland on June 12, top-ranked Belgium on June 17 and Russia on June 21.

“Expectations are pretty high but … we’re realistic, to make it to the semi-finals would be good,” Ferdinand said.

“The first objective is to qualify from the group stage in the best shape possible to continue our mission,” Hjulmand said as he presented his squad.