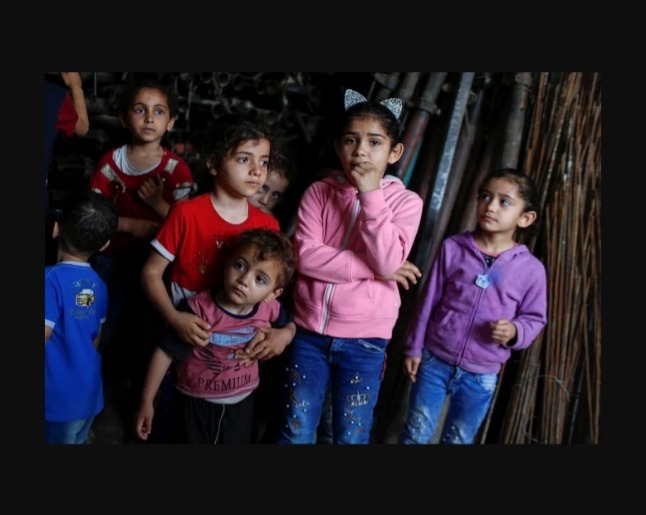 Mental health professionals in Gaza say they are faced with the difficult task of treating children for psychological traumas after the devastating Israeli attacks on the besieged strip, which killed over 250 Palestinians, including 66 children.

Thousands of children in Gaza suffer from trauma in the aftermath of the 11-day Israeli onslaught on the besieged enclave.

As Gaza tries to recover from the deadly 11-day Israeli attack, mothers and mental health workers have raised concerns that the psychological effects of the violence will long linger among the children in the Strip.

Hala Shehada, a 28-year-old mother from northern Gaza’s Beit Hanoun area, told Al Jazeera when the air strikes started hitting Gaza earlier this month she found herself reliving the tragic memories of the 2014 Israeli offensive as if it were “yesterday”.

“The latest offensive on Gaza took me back to the darkest memories from six years ago when my husband was killed,” said Shehada.

“But this time was even worse. My six-year-old daughter Toleen, who was born five months after her father was killed, was horrified during the offensive.”

Young people were among the most affected groups during the latest Israeli operation on the besieged coastal enclave. Israeli air and artillery attacks killed 253 Palestinians, including 66 children, and left more than 1,900 people wounded.

Two children were among 12 people killed in Israel by rockets fired by Hamas and other armed groups from Gaza during the same period.

The Israeli onslaught also completely destroyed 1,800 residential units in Gaza and partially demolished at least 14,300 others. Tens of thousands of Palestinians have been forced to take shelter in UN-run schools.

Although a ceasefire was reached between Israel and Hamas on May 21, many families continue to suffer. The majority were already traumatised by the 51-day Israeli bombing campaign of Gaza in 2014. That offensive killed more than 2,200 Palestinians, including 500 children.

Shehada was newly married at the time and four months pregnant when her husband, journalist Khaled Hamad, was killed by Israeli attacks on the Al-Shuja’iya neighbourhood on July 20, 2014.

At least 67 Palestinians were killed and hundreds more wounded in a night of intense Israeli attacks that Palestinian Authority President Mahmoud Abbas described as a “massacre” at the time.

Shehada described her experience of both wars. “Living in Gaza means having to relive trauma time and time again. War is the ugliest thing in the world. And the real war is the one you have to live with your memories of it.”

The worst part of the latest offensive was “being a mother who should be able to calm her daughter” while not being able to, Shehada said.

“It’s very hard to be a mum in Gaza. I was terrified myself. My daughter’s mental state deteriorated severely during the offensive. She was crying hysterically when she heard the bombs,” said Shehada.

“Even now with the ceasefire, Toleen suffers from nightmares. She wakes up screaming in the middle of the night. I try my best to comfort her, but it kills me to see her like this,” she added, sobbing.

Like many mothers in Gaza, Shehada said both her and her daughter need psychological rehabilitation. “Whatever I managed to overcome in the 2014 offensive has come back to haunt me,” she said.

But without many mental health support services available in Gaza, Shehada said most people in the Strip deal with the trauma alone.

“The suffering of my child makes me wonder how many children in Gaza have been suffering throughout their lifetime from the trauma of wars.”

Reem Jarour, 30, a social worker and mother of three, told Al Jazeera she has been struggling to stay strong and steady for her kids since the Israeli attacks.

“The children get seriously affected by the mental health of their parents, so my husband and I have been trying hard to hide our trauma in front of them,” Jarour, who has a six- and a five-year-old, and a five-month-old baby, said.

“I was trying to apply what I learned as a social worker by keeping them busy with activities like drawing and painting,” but it has not worked, she explained.

When Al-Jawhara tower where her father lived was targeted by Israeli attacks on May 11, she “was totally devastated”, she said.

“I was crying and weeping as I thought about my family and where they were going to go,” she recounted. “I wasn’t even able to contact them because of all the chaos at the time.

“But what forced me to stop was seeing my kids watch me as I cried. I felt I needed to be strong for them,” said Jarour.

Jarour and her husband decided to sleep in the same room with their kids throughout the offensive to try to comfort and reassure them.

“I never left them alone. But I knew by looking into their eyes that they were afraid. Children know everything happening around them,” she said.

Many mothers in Gaza complain that symptoms of trauma have started to appear in their children as well, Jarour said.

“My friends were telling me that their kids lost their appetites, while others have problems including speech disorders and bedwetting,” she explained.

“Everyone lost their strength in this war, including the parents. The children were the weakest link. It has been cruel,” said Jarour, who hopes specialised mental healthcare programmes will soon be launched across Gaza to help support children and their parents.

Ghada Redwan, a psychotherapist at the Palestine Trauma Centre UK, said several families in Gaza contacted the centre during the offensive asking for mental health support for their kids.

“There are a number of cases suffering from severe panic and intense fear. There are also children whose psychological symptoms are showing up in strong emotions and vomiting,” Redwan told Al Jazeera.

She said they advised mothers to try and remain calm in front of their kids, especially during the bombing, something obviously easier said than done.

Redwan said while dealing with trauma in the aftermath of the Israeli attacks was not new in Gaza, the capacity to help was limited while the need for care was huge.

Sharing her own experience as a mother of two girls aged six and three, Redwan told Al Jazeera it was really hard to get past the experience of the offensive.

“I kept my kids away from the news, watching cartoons and doing activities suited to their age. Whenever they were frightened by the bombs, I would hold them to calm them down,” she said.

“It was a daunting task for me and my husband, but we tried. I was slightly lucky to have experience in mental health therapy, which helped me support my kids. But what about the thousands of families who didn’t?”

According to the Norwegian Refugee Council (NRC), 12 of the 66 children killed by Israeli air attacks were participants in its programme aiming to help Gaza’s children overcome trauma from previous wars.

The children who survived the offensive are likely to relive the experience of the bombing nightly, NRC said in a recent statement, adding children in Gaza have five nightmares a week on average.

Hozayfa Yazji, Gaza area manager at the NRC, said the statistics highlight the extent of the distress the latest 11-day attack on Gaza has caused many children.

According to Yazji, the NRC has worked with 118 schools, providing support for 75,000 kids since it launched trauma therapy services for children in Gaza in 2012.

“But we now face a huge gap in psychological support services after the recent aggression,” he said. “The number of children needing psychotherapy is expected to triple.”

Yazji said the grave humanitarian conditions experienced by children in the Gaza Strip exacerbate their mental health conditions, but the military attacks have the worst effect on children.

The 14-year-long Israeli-imposed siege on the coastal enclave, rising poverty levels that stand at 50 percent of the population, an unemployment rate of 55 percent, and a dilapidated healthcare system all make the children’s suffering worse, he said.

Children under 18 years of age constitute 45 percent of the population in the Gaza Strip. “This makes the intervention of psychological first aid programmes an urgent need,” Yazji told Al Jazeera.

He said at least 90 percent of Gaza residents are in need of mental health support and treatment because of the repeated military attacks and devastating humanitarian conditions in the Strip.

“The need is beyond our capacity. We are working with several governmental and international organisations to scale up our programmes,” said Yazji, adding the council hopes to train more people who can provide mental health support across Gaza.