The time to act on Palestine and Kashmir is now, and tangible actions need to be taken immediately by the UN, whose “credibility is at stake,” said a top Pakistani politician.

“Why did the League of Nations fail miserably?” asked Shehryar Khan Afridi, the chairman of the Pakistani parliament’s special committee on Kashmir.

“Expectations are enormous. Our coming generation, future is at stake, so everyone needs to chip in. Let’s protect this universe and this entire world through peaceful means,” Afridi told Anadolu Agency in an exclusive interview, discussing the situation in the Indian-administered Kashmir and the occupied territories of Palestine.

Kashmir and Palestine are the two oldest cases on the table of the UN which await final resolution.

“We (Pakistan and India) have nuclear deterrence, the entire global peace is at stake,” said Afridi, referring to tensions between India and Pakistan over Kashmir, calling for granting the right of self-determination to the people of Jammu and Kashmir.

“Palestinians are humans. … They’re as human as anyone else, and they should be treated like that. And if the world is still silent on that, … if the world remains ignorant, trust me, we will have to pay a very heavy price, and none of us will be able to justify it,” said Afridi.

Afridi said it was “horrific” for him to see scenes from Gaza, which was bombed by Israel since May 10, killing (at least) 277 innocent Palestinians.

He said the Organization of Islamic Cooperation (OIC) “has a pivotal role to play.”

He recalled that prior to 1945, “there was no existence … nothing of any sort by the name of ‘Israel’ in Palestine.”

“And what has been happening since then is demographic terrorism, the worst form of terrorism. Innocent people of all age groups are being bullied, humiliated. They’re killing innocent children.” 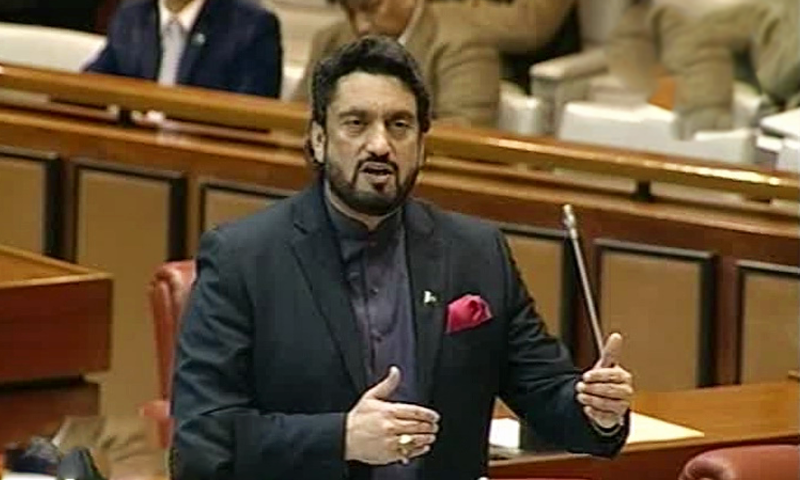 Afridi said it is not about Turkey and Pakistan or Iran or Hamas.

“It’s about every human. It’s about every sane human on the face of the earth. It is about all those who value their loved ones. So it is time to wake up before it’s too late and tangible actions need to be taken now by the prosperous world,” he added.

The Kashmir Committee chairman said the non-resolution of the Kashmir dispute is a “threat to global peace.”

“If we include Russia in this (South Asian) region, half the globe lives here. When we talk of half of the population of this entire globe, then we need to understand the importance of the Kashmir issue,” Afridi said.

“Why (Pakistani) Prime Minister Imran Khan has been constantly reminding the global community, and the prosperous world, that Kashmir is a flashpoint is for a reason that India, Pakistan, China, and Russia are nuclear powers and anything can challenge the peace of this global community,” he said.

He said that since Aug. 5, 2019, around 8 million people in the Indian-administered Kashmir have been “not only treated in an unjust manner, they are being bulldozed of their identity. Their rights were taken away when Articles 35A and 370 were abrogated from the Indian Constitution.”

They have been subjected to “everything … cultural terrorism, demographic terrorism, information terrorism.”

He said the EU DisInfo Lab “exposed India to the core which used fake 750 websites and fake identities through fake ways and means, tried to misinform the global community about Pakistan.”

The Line of Control, which divided Kashmir into two under India and Pakistan, said Afridi, is basically dominated by Kashmiris on both sides.

“Whenever Indian, when their politics or anything related against Muslims, is required for them for their own interests, what they do is they start targeting civilians. The world has witnessed such horrific scenes where children, schools, civilian areas are usually targeted and even the UN, their installation, their ambulances, Red Cross, were targeted,” he said, referring to tensions along the LoC in recent past.

India and Pakistan on Feb. 25 this year revived the 2003 agreed cease-fire along the LoC and since then tensions have died down.

“It was very beneficial. And now this (cease-fire) agreement, again, it goes a long, long way, and it’s basically for the people of Kashmir,” he said about the renewed cease-fire agreed by the militaries of the two countries.

He said the Khan government of Pakistan has one agenda: “Negotiations or trade or any other activity will start with India, once they go back to that position of 5th August 2019 that rights of 370 and 35 need to be given to the people of IIOJK.”

“And then when we talk from a military point of view (in IIOJK), (it is the) worst form of injustice. There is one soldier for nine Kashmiris.”

“Financially, the people of Kashmir have been deprived in all ways and means; they have been treated in such a manner where the global community needs to come forward and that is what Pakistan has been emphasizing,” said Afridi.

Afridi said Kashmir is not only an incomplete agenda of the UN. “Since 1948, the UN and the prosperous world is their guarantor to give their due rights.”

He also said India has jailed all those Kashmiris “who are talking about freedom.”

“All those who want their rights, they have been thrown behind bars. Asiya Andrabi, Dr. Qasim Faktoo, Mr. Shabir Shah, there are lots of other cases … but so they’re being drawn behind bars … They’re prisoners of conscience,” he added.

Referring to the death of Mohammad Ashraf Sehrai in police custody, Afridi termed it as a “classic example.”

“He was 78 years old and was martyred. He was behind the bars. And what was his crime? He wanted that commitment from the prosperous world and from India for the people of IIOJK and he became an example for the entire global community,” said the Kashmir Committee chairman.

Sehrai was in jail when his health deteriorated on May 4 and was declared dead by doctors a day later at a hospital in Jammu.

Afridi said the credibility of the UN is “at stake.”

“There are a lot of question marks on the UN now. Pakistan has been requesting the prosperous world, all key stakeholders to come forward and pressurize India to realize and to understand that commitment, which India took to the UN in 1948,” he said.

It was former Indian Prime Minister JL Nehru who took the Kashmir issue to the UN, said Afridi. “Now it is obligatory and mandatory on us, and global key stakeholders, especially the prosperous world, they need to come forward.”

“We are committed as a nation, but it is obligatory on the prosperous world they need to come forward. It was taken up at the UN Security Council thrice after August 5, 2019, then by the Human Rights Council.”

He said India was “constantly confusing the entire global community that Kashmir is a bilateral issue.”

“Anyway, it was never a bilateral issue, it was always a multilateral issue because the UN, and all signatories of the UN since 1948, (have been) on around dozens of resolutions on Kashmir, that in itself speaks high volumes,” Afridi said.

“The entire global community is a guarantor of that commitment which was given that plebiscite and right to self-determination that was supposed to be given on priority basis to the people of IIOJK, that has not been fulfilled,” he added.

He said Pakistan has a “very clear stand” on Kashmir.

“Our foreign policy has been very, very critical on that. And since we represent both the houses, as Kashmir Parliamentary Committee where I have got members from all political parties from the opposition and from ruling parties, our stance is that India needs to go back prior to the 5th of August 2019, only then, anything in any capacity, a dialogue or trade or anything can be initiated.”

It is earlier reported that a Palestinian man was shot and killed by undercover Israeli forces early on Tuesday in the occupied West Bank city of Ramallah, hours before US Secretary of State Antony Blinken arrived in the country for talks.

Ahmad Jamil Fahd, from al-Amari refugee camp, was shot by the Musta’ribeen unit in the Umm al-Sharayit area, Palestinian witnesses said, and was left to bleed to death before an ambulance could arrive.

The undercover unit is made up of Israelis who are disguised as Palestinians and often conduct raids to arrest or kill.

According to a spokesman for the Palestinian health ministry, Fahd was shot multiple times at close range.

The killing took place on the same day that Blinken, who said his trip was to support “efforts to solidify a ceasefire”, met Israeli Prime Minister Benjamin Netanyahu in Jerusalem. He is scheduled to meet Palestinian President Mahmoud Abbas later in the day.