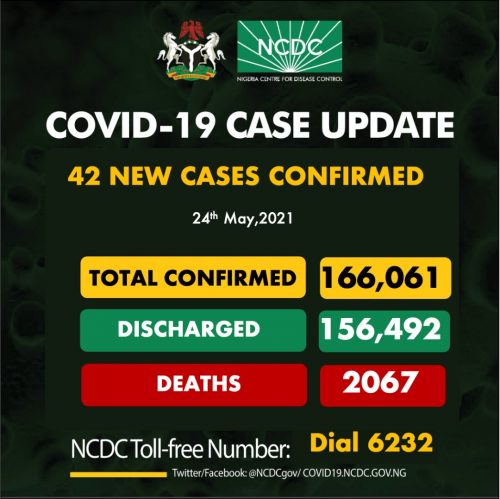 The Nigeria Centre for Disease Control (NCDC) has registered 42 new cases of COVID-19, bringing the total number of infections in the country to 166,061.

The NCDC said this on its official Twitter handle on Monday.

The News Agency of Nigeria (NAN) reports that the 42 new infections represent an increase from the 40 cases logged on Sunday and the 35 reported Saturday.

It stated that the 42 were registered from seven states and the Federal Capital Territory (FCT).

The agency said the new cases included 14 from Lagos, 11 from Gombe, 5 from Osun and Kano, 4 from FCT and 1 from Edo, Kaduna and Rivers.

It, however, stated that no new deaths were announced on May 24,  making the death toll stand at 2,067.

The NCDC stated that there were now 166,061 confirmed cases of COVID-19 in the country, including deaths and recoveries.

It said 16 people recovered from the virus and were discharged after testing negative, which brought the total number of recoveries in the country  to 156,492.

It said there were about 7,476 active cases across the country as of May 24.

It added that a multi-sectoral national emergency operations centre (EOC), activated at Level 2, continued to coordinate the national response activities.

The NCDC said it had tested over two million people since the beginning of pandemic on Feb. 27, 2020.

Meanwhile, it noted that to prevent the risk of the spread of COVID-19, Nigerians must adhere to all public health measures.

“It is our collective responsibility to keep each other safe, healthy and protected,” it said.