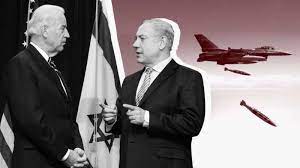 Blinken on Monday said he was traveling to al-Quds, Ramallah, Cairo, and Amman “at the request of (US) President Joe Biden” in an attempt to “solidify a ceasefire.”

Earlier, the White House in a statement announced that the top US diplomat would depart for a short visit to the region on Monday.

It said Blinken will meet with Israeli regime officials about US “ironclad commitment” to the regime’s security, in a signal that the trip has been choreographed to express solidarity with the Israeli regime.

Before embarking on the trip, Blinken reiterated US support to the Israeli regime, saying the Biden administration remains committed to providing the regime with what it needs to defend itself.

President Joe Biden “has been equally clear we’re committed to giving Israel the means to defend itself,” Blinken said in an interview with ABC News.

He also pointed to what he claimed to be the Biden administration’s “relentless, determined, but quiet diplomacy” in the region, saying it’s “what got us to where we needed to be.”

READ ALSO:  Protest in Ogun over kidnap of FUNAAB student by suspected gunmen

Blinken, however, will not be meeting the officials of the Palestinian resistance group Hamas, which inflicted a crushing defeat on the Israeli regime after fierce 11-day aggression by the latter.

The US government has come under severe criticism across the world, including from the US Democrats, for not doing enough to prevent its ally from unleashing unutterable terror on Palestinians.

It has also been under fire for approving the sale of $735 million in precision-guided weapons to the Israeli regime amidst the regime’s aggression in Gaza.