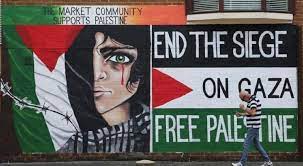 Lawmakers in Ireland have submitted a draft resolution to expel the Israeli ambassador from the country over the regime’s latest atrocities against occupied Palestinian territories before it was forced to accept a ceasefire deal.

The motion – submitted last week by 11 legislators from four political parties and due to come to vote this week — partially states, “Over 60 children have been murdered by the [IDF],” referring to the Israeli military forces, adding that, “The current escalation of violence was instigated by the attempt to ethnically cleanse 28 Palestinian families from the Sheikh Jarrah area of Jerusalem (al-Quds).”

Leading sponsor of the motion, Gino Kerry of People Before Profit (PBP) Party, also criticized the European Union for refusing to hold the Tel Aviv regime accountable for its atrocities in a blog post on the PBP’s website, expressing outrage that “the EU has never once ever envisaged to sanction apartheid Israel economically and hold them accountable for war crimes.”

Another major opposition party, Sinn Féin, which holds 37 seats in the lower house of the parliament – the Dail — also plans to back the motion condemning the Israeli atrocities. The party’s youth wing also posted an online petition calling for the expulsion of the regime’s ambassador, drawing over 84,000 signatures as of Sunday.

This is while the PBP and pro-Palestinian activists are reportedly lobbying those legislators in the Dáil who may have abstained on the motion to expel the Israeli envoy.

Additionally, the coalition is considering allowing lawmakers to vote according to their conscience, making it possible for other pro-Palestinian parties, such as Fianna Fail and the Greens, to vote in favor of the motion – which would not be binding but will likely put pressure on the Irish government.

Sinn Féin, which has long adopted positions against the Israeli regime, also submitted a motion condemning “ongoing displacement of Palestinian communities in East Jerusalem and the West Bank,” further declaring that “Israel has annexed de facto the land in the West Bank on which settlements are built.”

Successive Irish governments have often been highly critical of Israeli abuses against the Palestinian population and taken a leading role in the EU in pushing for harsher measures against Tel Aviv.

The Israeli regime unleashed an 11-day bloody onslaught against Gaza before a ceasefire came into effect on Friday. The offensive followed weeks of heightened tensions in Jerusalem al-Quds, which prompted Gaza-based resistance groups to launch rockets into the occupied territories.

The combination of atrocities has incurred far-and-wide international ire.

Israel has waged three all-out wars against the territory so far, killing thousands of Palestinians each time.