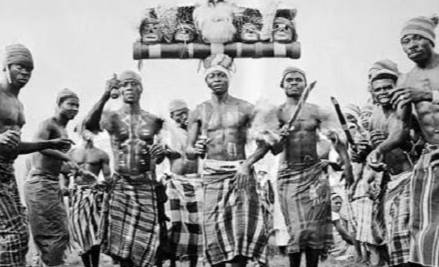 These things were believed by the Igbo people in the ancient days and some still prevail to this day. The Igbos are the people of an ethnic group native to southeastern Nigeria. In ancient times, rules and beliefs were adapted to keep the sanity of the land and not incur the wrath of the gods.

Most of these beliefs were born out of fear of the unknown. Even though they are thousands of years old, they are still believed and practiced by a lot of people.

In things fall apart, Chinua Achebe states that Ogbanje is ” a ‘wicked’ child who continually re-enters its mother’s womb only to die, again and again, causing its parents grief”.

In the old days and till now, when a man is interested in marrying a woman, he calls his kinsmen, takes a calabash of fresh palm wine, and walks to the girl’s house to ask her father for her hand. He carries the keg on his head till he gets to the house. It is considered bad for his calabash of wine to fall to the ground before he gets to his destination. If this happens, he is to turn back immediately and desist from his plans to marry from that particular house.7

It was believed that two fingers of plantain joined together was a bad omen. When one is separating them, he/she is to put it behind his back and not use his/her eyes to see the separation. If not, the person would give birth to conjoined twins.

Pythons are generally sacred in Igboland and must not be killed or eaten. Pythons are believed to be the reincarnation of ancestors, and regarded as “our father.” They are also believed to be Ala, the guardian of the land/underworld. Killing a python is like killing one’s own father, and apart from drawing the ire of the whole community, it could also draw the ire of the gods.

Killing oneself or committing suicide is a taboo in Igboland, and so much frowned upon by both man and gods that the victim of suicide must never be buried within the community. His body is cursed and must never be buried in the land, but in the Forbidden Forest or outside the town to prevent such evils from befalling others in the community. This is also a common taboo to the Yoruba people.

Using “aka ekpe“, or left hand to do anything is forbidden in Igboland and strictly prohibited – regardless of the fact that the individual may be left-handed. A left-handed individual is trained or oriented to learn the use of the right hand in eating, writing, giving, and accepting things. Elders deeply frown on giving or taking things with the left hand because it is considered most disrespectful and unfortunate. This belief is very common throughout Nigeria and is one every Nigerian will understand.

An Osu is an outcast within the caste system, and marrying one is considered a taboo that must never be done. An Osu or outcast is considered the property of the gods or a slave and descendant of slaves and must never be offered or taken for marriage. Free-born men and women are expected to investigate the origins and social class of an individual to be certain he/she is not an Osu before contracting marriage. Even to this day, marriage proceedings have been stopped because investigations discovered either family was a descendant of an osu.