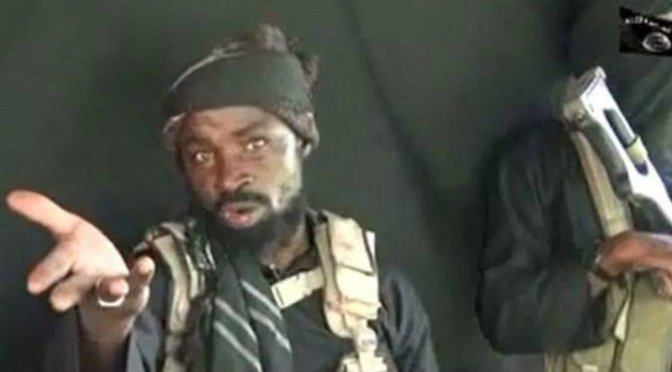 The United States has made it clear that the $7million bounty placed on Abubakar Shekau, the leader of the Boko Haram sect, will not be given to the Islamic State in West Africa Province (ISWAP).

The US made this known via a tweet by its State Department Rewards for Justice Program.

“News reports today indicate that Boko Haram terrorist Abubakar Shekau blew himself up in a confrontation with ISIS affiliates.

“Hey, ISIS guys. To clarify: no – you are not eligible for the reward for information on his identity or location. That’s not how the program works,” it read. 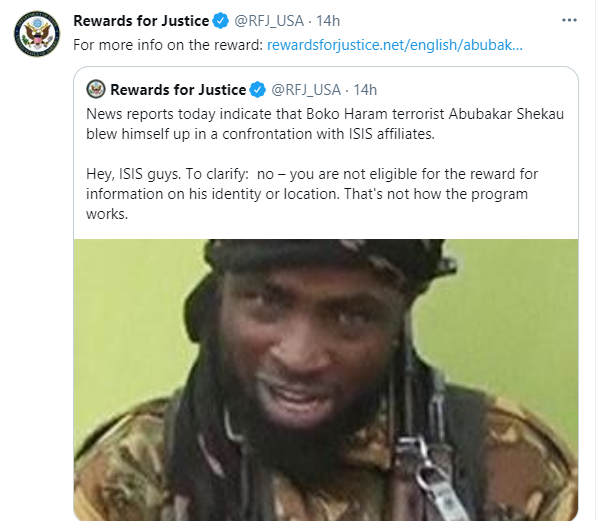 The United States Department of State had placed a $7million bounty on Shekau’s head.

The Boko Haram leader was named a “specially designated global terrorist” on June 21, 2012, under executive order 13224.

On Thursday, reports emerged that Shekau was fatally injured, after attempting to kill himself to avoid being captured by rival Islamic State-allied fighters.

There are also reports that he died by blowing up himself with a suicide vest.

However, the Nigerian Army said that it was probing the reports indicating that Boko Haram leader Abubakar Shekau was “badly injured” or “dead”.

It is earlier reported that the factional leader of Boko Haram, Abubakar Shekau, has been reported dead many times, with even the Nigerian Army celebrating his demise on not a few occasions.

But like a cat with nine lives, the much-dread factional leader of Boko Haram has always proved those who wish him dead wrong.

He had always appeared in a video after such death rumours mocking those who wish him dead while vowing to continue his atrocities.

For example few days after the Nigerian army declared him “fatally wounded” on Aug. 19, 2016, he appeared in a video to mock the government that has claimed to have killed him at least four times already.