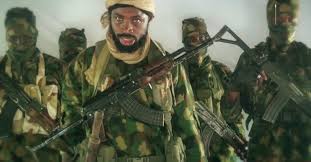 The factional leader of Boko Haram, Abubakar Shekau, has been reported dead many times, with even the Nigerian Army celebrating his demise on not a few occasions.

But like a cat with nine lives, the much-dread factional leader of Boko Haram has always proved those who wish him dead wrong.

He had always appeared in a video after such death rumours mocking those who wish him dead while vowing to continue his atrocities.

For example few days after the Nigerian army declared him “fatally wounded” on Aug. 19, 2016, he appeared in a video to mock the government that has claimed to have killed him at least four times already.

“To the despot Nigerian government: Die with envy. I’m not dead,” a man purporting to be Shekau says in the video.

This was why most Nigerians were skeptical when news broke late Wednesday that Shekau has died after he was captured in a fierce battle between his group and the Islamic State of West Africa Province (ISWAP) in the Sambisa forest.

But by Thursday morning, the fact that Shekau may had succumbed to violence he has been dishing out to the people of the Northeast Nigeria since 2009 assumed reality with even more graphic details of how he was killed by members of a rival group.

Unconfirmed reports says the much-dreaded terrorist leader may have died after blowing himself up and committing suicide when ISWAP tried to capture him alive.

Reports say Shekau and his followers were surrounded by ISWAP jihadists on Wednesday by ISWAP, where they demanded he surrender. But rather than surrendering, he decided to kill himself.

“To avoid capture, Shekau shot himself in the chest and the bullet pierced his shoulder,” the source said, adding: “He was badly injured.”

Some of his men managed to escape with him to an unknown destination, the source added.

Another source said Shekau was badly injured after detonating explosives in the house where he was holed up with his men in order to avoid being captured.

Shekau’s faction, Jama’tu Ahlis Sunna Lidda’awati wal-Jihad, JAS, and ISWAP have been embroiled in a battle for supremacy in the Sambisa forest and have engaged each other in a series of clashes.

But ISWAP militants have become the dominant force in Nigeria’s more than decade-long jihadist insurgency, carrying out complex attacks on the military and overrunning army bases.

Shekau made international headlines when his men kidnapped nearly 300 schoolgirls in Chibok in 2014. Shekau, who became leader of Boko Haram after its founder, Muhammed Yusuf, was killed by the police in 2009, is notorious for appearing in videos, boasting about his exploits and his jihadist mission in the West African sub-region. What is clear is that Shekau, a man of violence has died by violence.