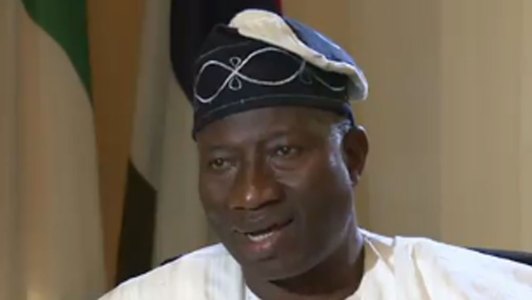 A youth group, under the aegis of Youths Earnestly Demand for Goodluck Jonathan 2023, have called on former President Jonathan to consider contesting the presidency in 2023, because of his qualities as a true democrat and nation builder.

The group made the call in a statement jointly signed and issued by the Chairman, Mr. Teddy Omiloli, and its National Director Operations, Mr. Douye Daniel on Sunday, in Abuja.

It described Jonathan as a nation builder and a solution to the country’s problems, saying that it would fund his electioneering campaign should he accept the call to return to power in 2023.

“We are demanding for Dr. Goodluck Ebele Jonathan to return to power as president, come 2023.

“And we have resolved to fund Jonathan’s electioneering campaign, including purchasing Expression of Interest and Nomination form for him, should he accept the call to return to power in 2023.

“At this point in time, after a vivid look into the ideologies and activities of our present political players, which includes the youths and elders, we saw in Jonathan, a true democrat, a nation builder, a divinely inspired goal-oriented leader of integrity that has the solutions to the present Nigerian problem,” the group said.

The group cited Jonathan as having proven that he could sacrifice anything to ensure the unity, peace, and development of the country, such Nigerians, including political elites and religious leaders, should join the call for the return of former President Jonathan and also join its #BringbackGEJ project.

According to the group, it decided to take up the project because of its readiness to contribute to the restructuring of Nigeria for a better future.

“Finally, we call on every Nigerian to lend a voice to the demand for the return of Goodluck Jonathan come 2023.

“He has no choice but to accept the call for him to render service to humanity in the capacity of the president of Nigeria,” the group said.

The group also stressed that as the giant of African, Nigeria should not be allowed to collapse by simple lies sold to its citizens by the country’s enemies, especially secessionists.

It advised that the energies used for secession campaigns should be channeled into more useful ventures that would benefit the country.

“A united, focused and developed Nigeria is an economic power threat to some world powers and first-world nations.

“We should all work together with the government as one big family, leaving religious, ethnic, tribal, and cultural sentiments aside,” the group said.

This, it said, was critical to ensure that the present security and economic challenges facing the country became a thing of the past.

It said we need to get it right as a country and rise to serve our fatherland with love, strength, and faith because Nigeria remained ours and would always be our unique home, adding that together, we could rebuild a country of our dream.