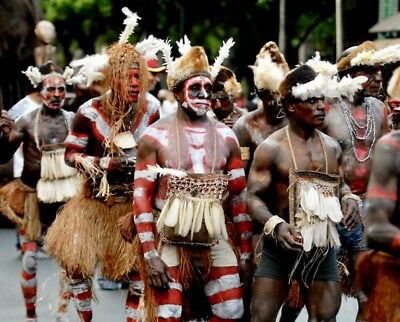 The Asmat tribe is the world’s most famous cannibalistic tribe and the mere mention of their name used to evoke fear.

This ancient tribe have been accused by Carl Hoffman, in his exposé novel, Savage Harvest, of killing and eating Michael C. Rockefeller in 1961.

Asmat is a tribe living on small islands in mangrove vegetation nearby the sea, on the south side of the western part of the New Guinea Island. They are the most famous cannibalistic tribe on Papua, a province of Indonesia.

The Asmat population is estimated at about 65,000 people, living in villages with populations of up to 2,000.
Their languages belong to the Papuan language family known as Asmat-Kamoro, which has over 50,000 speakers.

The members of the Asmat tribe believe that they arose out of wood. Therefore, wood is sacred for them. Even in ancient times they carved wonderful things from wood. Asmat are considered to be the best woodcarvers of the stone-age and many of their engraved carvings are in museums around the world.

Though they are widely known for the quality of their wood sculptures, they are also notorious for their traditional practises of headhunting and cannibalism. Asmat did not only hunt for skulls, they also worshipped them. The skulls of the deceased were stripped of the brain and the eyes and nasal parts were closed up in order to prevent evil spirits to enter or exit the body. Skulls that were modified and decorated in this way, were displayed by the Asmat in a honourable place in their long homes.

They would put human skulls under their heads instead of a pillow. They would eat brains of their animals mixed with sago worms straight from their halved skulls.

Besides the fact that the Asmat were head-hunters, they also “hunted for names”. They believed that when they killed a man and ate him, they take his power and become him.

Every person was named after someone deceased, or after a killed enemy.

A child was sometimes given a name only ten years after it was born, and after its village set out to kill a man from an enemy village nearby.

0They had to learn the name of the man they killed, and then bring his skull to their village. Only in this way could a person get a name.

Fortunately, the evil reputation of Asmat has become history. The missionaries have done a lot of work in changing this. The central Asmat now even have a written form of their spoken language.