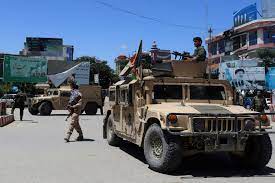 local officials confirmed that clashes between the warring sides began on Sunday on the outskirts of Lashkar Gah, the capital of the southern province of Helmand.

“The fighting started early today morning and is still ongoing,” Attaullah Afghan, Head of the Helmand Provincial Council, was quoted by AFP, as saying.

He said Taliban fighters attacked security checkpoints on the outskirts of Lashkar Gah and other districts.

Lashkar Gah has been the scene of intense fighting since the United States officially began the process of withdrawing its remaining troops from Afghanistan on May 1.

All foreign troops were supposed to have been withdrawn by that time as part of an agreement the US had reached with the Taliban in Doha last year. However, President Joe Biden pushed that date back to September 11, angering the Taliban.

As the violence escalated, Afghan President Ashraf Ghani urged the Taliban to announce a permanent truce, saying that the withdrawal of foreign troops has now left no reason for the group to continue killing their own people.

However, according to the Ministry of Defense, at least 40 people were killed and wounded on Saturday in separate Taliban attacks in nearly ten provinces despite the ceasefire.

“The Taliban violated the ceasefire in several areas and provinces and it caused casualties among civilians and military personnel,” said the ministry spokesman Rohullah Ahmadzai.

He said that Taliban leader, “Mullah Hibatullah has no authority on all factions of the group and his loyalists are not abiding by his orders.”