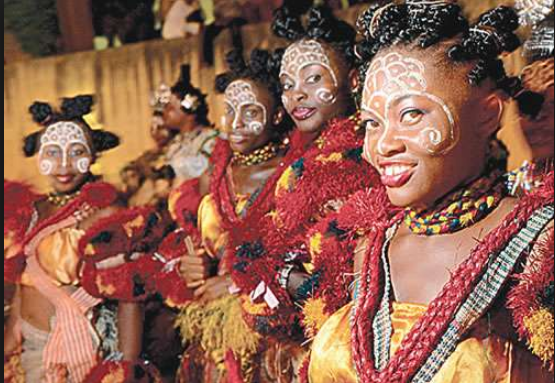 It is important to state here that in addition to their present homeland, the Efik people also occupy southwestern Cameroon including Bakassi.

It took the loving people of Efik over five hundred years of migration to finally inhabit the coastal area of South-Eastern Nigeria, Cross River State.

Although the actual origins of the Efik people seem to be unknown but traditional tales have it that they sojourned from Nubia through to Ghana and then Arochukwu in present-day southeast Nigeria.

It was not stated how long their exodus took to get to Arochukwu, but what is known is that the Efiks lived peacefully as guests for about four hundred years (11th – 15th century) with the Aros.

They would later leave after a disagreement erupted between them and their host.

During the second phase of their exodus which saw them leaving Arochukwu, the majority of them left to Uruan in present-day Akwa Ibom State, while a few to Eniong and surrounding areas.

And just like their ancestors did at Arochukwu, they settled peacefully in Uruan.

However, they would again move from Uruan without history telling us the reason why. And when they did, it was in Ikpa Ene and Ndodihi they found themselves.

But this time around, it was a brief stay they had before crossing over to their final destination in Creek Town (Esit Edik / Obio Oko).

Creek town and its environs are what is today referred to as Calabar.

Until 1954 before it achieved autonomy, this area was formerly a trust territory from German Cameroon which was administered as a part of the Eastern Region of Nigeria.

It was only after their autonomy that the political separation occurred.

On the whole, the history of Efik migration and settlements seems to have three successive stages; (a) an Igbo phase (b) an Ibibio phase, and (c) the drift to the coast.

And it is for this reason that the Present-day Efiks are related to the Annang, Ibibio, Igbo, Oron, Biase, Akampkpa, Uruan, and Eket people.

The old ‘Fattening Room’ tradition is the first thing that comes to mind whenever this subject (Efik marriage) is to be discussed.

Although greatly modified for today’s generation, the fattening room tradition of the Efik people was/is the secluded training given to maidens in preparation for womanhood.

Six months before marriage, Efik girls are sent to the fattening room that they may be pampered with massages from head to toe; fed as much as they would like to eat, and enlighten them on the ins and outs of marriage.

They would not be allowed to do work.

Instead, they are to eat sumptuous dishes, engage in meaningful conversation, and sleep; coupled with the three times daily massages that are meant to bring out the natural endowments.

Because it is the belief of the Efik people that a woman who is full-figured with a healthy waistline is beautiful.

In addition to the above Fattening Room activities, the girl goes through domestic training in home management (like cooking, child care, and housekeeping) and how to respect and make her husband be and his family happy.

It is the duty of the older women to give advice about their experience in marriage to ensure a successful one.

Also included in the training are the cultural dances (Ekombi), folklore, folktales, songs, and other forms of entertainment. Skills in artistic designs on Calabash and other materials are taught as well.

It is here that she is also taught about sex with the intention of giving proper satisfaction to her husband.

At the end of the six months period, which also brings an end to the seclusion days, people all over are invited to honor her success in passing through this ordeal.

This ceremony is celebrated with traditional Efik dances (Ekombi) and other forms of entertainment.

The ceremony continues throughout the whole day and night as families, friends, and well-wishers express their joy and happiness with gifts and donations to the bride.

And finally, she and her future husband embrace and dance; welcoming their good wishes that have come to join the celebration.

As a result of the factors that characterized their settlement, Efik dishes are mainly those sourced from the rivers.

All Efik clans and sub-clans seem not to be separated from river banks or creeks. And owing to this, their nutritional culture is also tied to the seas.

According to Efik methodology, Abbasi is considered to be the Supreme Creator (God). And His wife, Atai, is known as the mediator.

It is also believed that Atai convinced Abbasi to allow two humans (one man and one woman), which is also said to be their children, to live on Earth, but forbade them to work or reproduce.

The children were required to return to heaven with Abassi whenever he rang the dinner bell. These rules were established so that the Efik people would not surpass Abassi in wisdom or strength.

But just like the Biblical story of Adam, the children disobeyed and Abassi did not only killed them, He also cursed them with chaos and death.