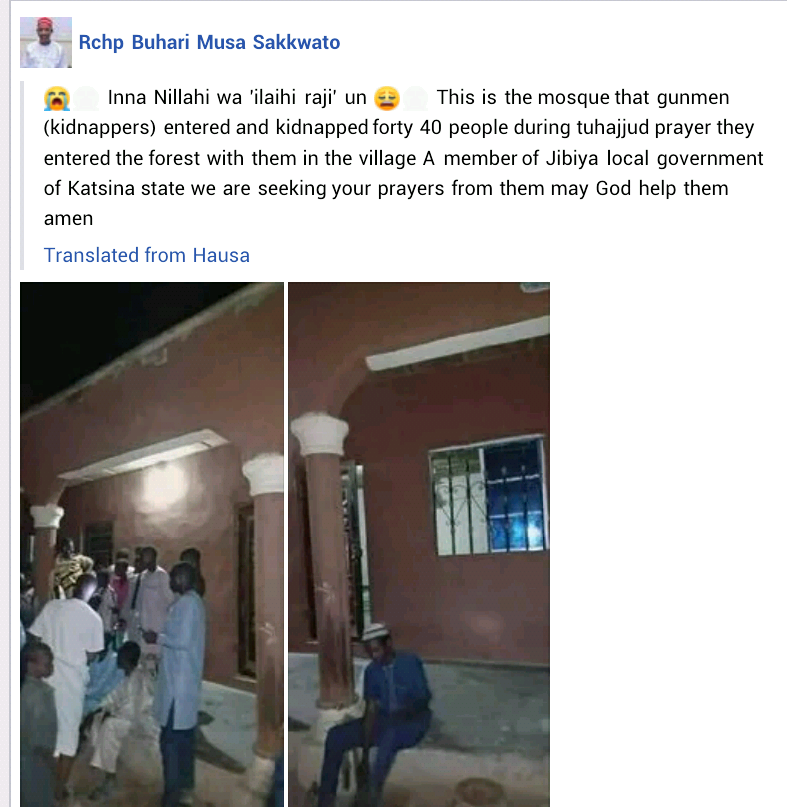 Katsina, despite being the home state of President Muhammadu Buhari, has witnessed sporadic attacks by bandits and kidnappers that have claimed the lives of many.

Gunmen suspected to be bandits have attacked a mosque in Katsina state during the Laylatul Qadr prayer, abducting at least 40 worshippers.

Laylatul Qadr, the Night of Decree or Night of Power, is one of the most sacred nights in the Islamic calendar. It takes place in the last ten days of Ramadan and was the night in which the Qur’an was revealed to the Prophet Muhammad (SAW).

It was gathered that the incident happened around 12 am in Kwata, Jibia Local Government Area of the state.

Katsina, despite being the home state of President Muhammadu Buhari, has witnessed sporadic attacks by bandits and kidnappers that have claimed the lives of many.

No fewer than 300 people have been reportedly killed by the gunmen in Jibia, Kankara, Dutsinma, Musawa, Danmusa and Safana local government areas.

On December 11, 2020, some bandits kidnapped 344 students of Government Science Secondary School, Kankara. They were released about a week later.

Also on December 19, 2020, 84 Islamiyya students of Hizburrahim Islamiyya in Mahuta village, Dandume Local Government Area of the state were also kidnapped but rescued shortly after.

It was earlier reported that armed bandits on Friday stormed a Juma’at mosque in Dutsin Gari village in Kanoma, Zamfara State, abducting the Imam and about 40 congregants.

The village, famous for sugarcane production, has been a target of the kidnappers.

Credible sources in the village told reporters that the attackers, who came astride over 100 motorcycles, killed 5 worshipers and injured several others.