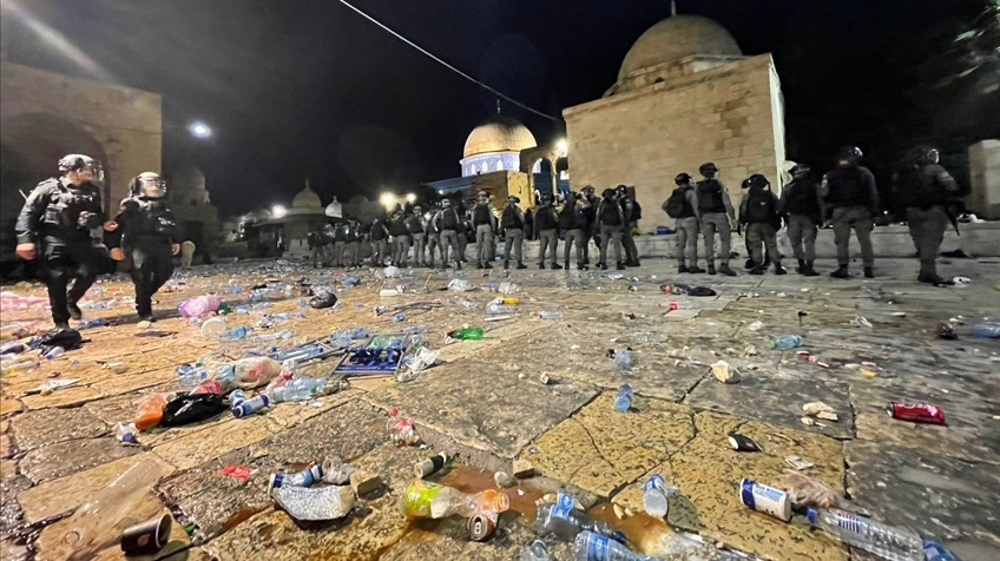 An Israeli F-16 fighter jet has bombed the central Gaza Strip and the regime’s military has fired artillery shells at the besieged coastal enclave amid rising tensions in Jerusalem al-Quds.

The Israeli warplane struck two sites in the city of Deir al-Balah on Sunday, destroying them and damaging nearby property, the Palestinian Wafa news agency reported.

The aerial assault, however, caused no injuries, the report added.

Additionally, on Sunday, the Palestine al-Yawm (Palestine Today) channel reported that the Israeli army fired two artillery shells towards the east of Deir al-Balah, with no casualties.

The Israeli army said it had carried out a strike on a Gaza military post belonging to the Hamas resistance movement in response to an alleged rocket attack from the coastal strip into southern occupied territories.

Alert sirens were triggered after the rocket fire, but there were no reports of injuries or damage.

Earlier on Saturday night, Israeli forces fired rubber bullets and tear gas at the Palestinians who were protesting along the Gaza fence in solidarity with their fellow citizens in Jerusalem al-Quds.

At least three Gazans were injured during the clashes, Palestinian media reported.

According to Israeli media, dozens of incendiary balloons were launched from Gaza, causing 12 fires in the occupied lands.

The Gaza flare-up came a day after al-Quds saw some of the city’s worst violence in years, with over 200 Palestinians wounded as Israeli police attacked worshipers at the al-Aqsa Mosque compound.

The clashes broke out amid protests against the planned eviction of Palestinians from their homes in the East al-Quds neighborhood of Sheikh Jarrah.

On Saturday night, the spokesman of the Izz ad-Din al-Qassam Brigade, Hamas’ military wing, issued a statement in support of the al-Quds protests.

“We salute the steadfastness of our people stationed in al-Quds and al-Aqsa, and we tell them that the Commander of the al-Qassam Brigades, Muhammad al-Deif, has promised you and will not break his promise,” Abu Ubaida said.

He was referring to Deif’s statements released last week, in which he said, “This is our final warning. If the aggression against our people in the Sheikh Jarrah neighborhood does not stop immediately, we will not stand idly by and the occupation will pay a heavy price.”

Moreover, the Palestinian resistance movement Islamic Jihad warned Israel that “its criminal leaders must understand the message of the resistance leadership well.”

It further called on the Palestinians to continue protests on Monday, when Israelis celebrate the occupation of al-Quds in 1967, so that “the enemy and everyone who supports it knows that the men of al-Aqsa are the people of defiance and steadfastness.”