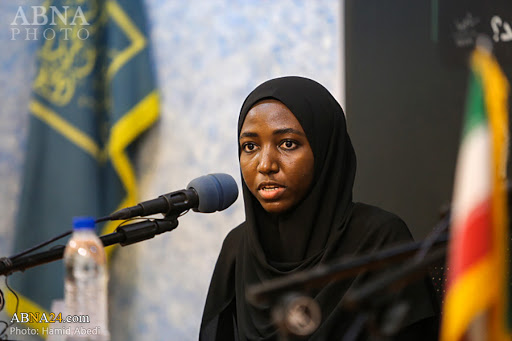 Suhaila El-Zakzaky, the daughter of Nigeria’s top Shia cleric Sheikh Ibrahim al-Zakzaky, underlined that the Islamic Movement in Nigeria (IMN) considers supporting the oppressed people of Palestine as its duty, and said that no factor can prevent organizing the International Quds Day in the African country.

“Sheikh Ibrahim al-Zakzaky and his followers considered supporting the oppressed people of Palestine as their duty,” Suhaila Zakzaky told FNA on Friday.

She reiterated that no factor can prevent magnificent organization of International Day of Quds in Nigeria.

On International Quds Day in 2014, some Nigerian Muslims in the city of Zaria, who took to the streets in support of the Palestinian people, were attacked by Nigerian government forces and most of them were martyred, Zakzaki added. On Quds Day Rally in 2014, three children of Sheikh Ibrahim al-Zakzaky were also martyred, she pointed out.

“In order to commemorate and keep Al-Quds Day alive, the least we can do is to show solidarity with our Palestinian brothers and to stand up for this solidarity, and this is what my father and his followers care about and consider it their duty, so that no obstacle can undermine my resolve to do so,” she reiterated.

READ ALSO: 49 Shiites Arrested As One Officer Died During The Quds Protest

The International Quds Day is an annual event opposing Israel’s occupation of Beitul-Muqaddas. Anti-Zionist rallies and demonstrations are held on the last Friday of Ramadan in Muslim and Arab countries around the world, specially in Iran, as well as a large number of non-Muslim states.

The International Quds Day was started by the late Founder of the Islamic Republic, Imam Khomeini, in 1979 as a way of expressing solidarity with the Palestinians and underscoring importance of the holy Quds to Muslims.

Meanwhile it was reported that the police have arrested 49 Shiite members of the Proscribed Islamic Movement of Nigeria (IMN) after the Quds protest left one officer dead in Abuja.

The spokesman of the command, ASP Yusuf Mariam confirmed in a statement that one police officer was killed in the Quds Protest.

49 Shiites arrested as one Police officer died during the Quds protest.

The FCT Police Command on Friday, 7th May 2021 has confirmed that they have successfully restored calm at Berger Round-About after the Quds protest was carried out by some members of the proscribed Islamic Movement of Nigeria (IMN)-Shiites.