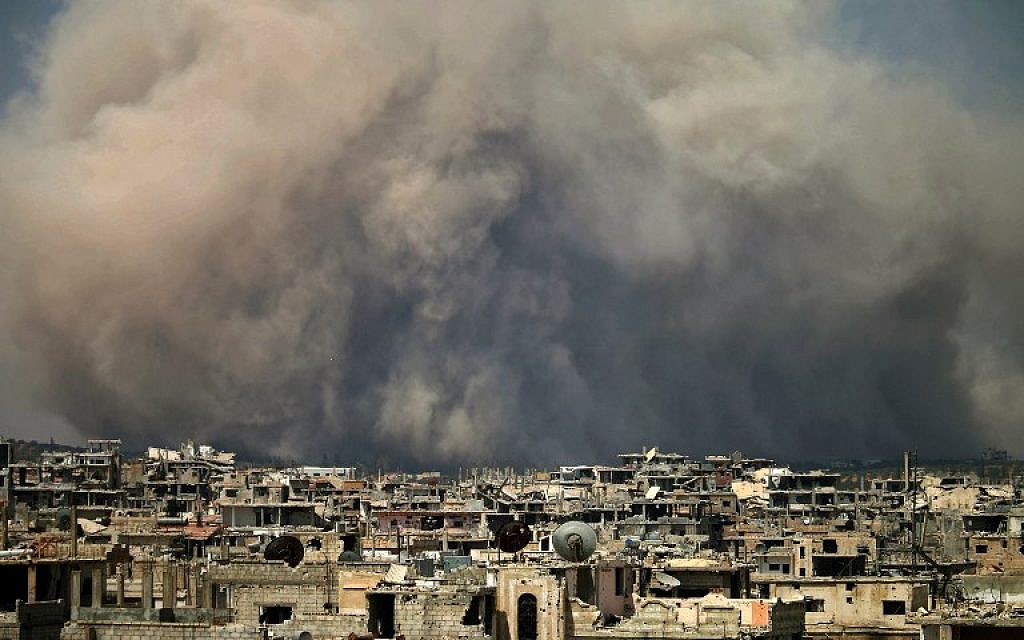 Speaking in an interview with FNA,  Medhurst said, “Efraim Halevy, former head of Israel’s intelligence service the Mossad, even admitted in an interview that Israel had provided aid to Al Qaeda fighters just because it was advantageous for them to see the Syrian government fall… The United States, United Kingdom, and other countries began funding armed groups inside Syria, funneling weapons and supplies to them, in order to overthrow the Syrian government.”

Richard Medhurst is an independent journalist and TV host, born in Damascus, Syria.

Below is the full text of the interview

Q: Three US Presidents over 10 years have waged war on Syria. What is the US after in Syria?

A: Syria plays an extremely vital role in the Middle East. Bordering Turkey, Iraq, Lebanon, Jordan and Israel, and with access to the Mediterranean Sea, Syria holds unique geopolitical and strategic importance in the region.
Although the war on Syria is portrayed as strictly a civil war or part of the popular uprisings of the ‘Arab Spring’, the reality is more complex than that.

As General Wesley Clarke points out in 2007 there had been an agenda to take out “seven countries in five years” among them Syria, Iraq, Lebanon, Libya, Somalia, Sudan, and Iran; the objective is to replace their governments with ones favorable to Washington DC.

While some argue the main goal is to build the Qatar-Turkey pipeline through Syria and undercut Russia’s market share in Europe, I think the primary objective for the United States has always been largely focused on regime change and to remove the “thorn” in Israel’s side. Syria refuses to recognize Israel and has no official ties with the Zionist occupation. Syria has been at odds with Israel for the last 73 years. Not just since the start of the occupation of Palestine in 1948, but also the capture of the Syrian Golan Heights in 1967 and consequent annexation. Syria supports various resistance movements across the region including the Palestinian resistance, Hezbollah, the Popular Mobilization Forces in Iraq. Moreover, Syria is allied with Iran, Russia, and part of what many call the “Axis of Resistance”.

The United States, United Kingdom, and other countries began funding armed groups inside Syria, funneling weapons and supplies to them, in order to overthrow the Syrian government. Efraim Halevy, former head of Israel’s intelligence service the Mossad, even admitted in an interview that Israel had provided aid to Al Qaeda fighters just because it was advantageous for them to see the Syrian government fall. Despite this, their gamble has failed thus far: Syria has taken back most of its territory from Daesh and other foreign-backed terrorists and has even stronger relations with its allies than before. Take for example Russia’s naval port in Tartus, which gives it access to the Mediterranean Sea. A decade ago, at the start of the war, the port was practically crumbling, Ten years later in 2021, it has been completely renovated, upgraded, and fitted with state-of-the-art ships.

READ ALSO:  Israel to ‘pay heavy price’ if it fails to end aggression in Sheikh Jarrah

Seeing how their strategy to topple the Syrian government through various terrorist and armed groups has failed, the United States is now occupying Syria’s vital breadbasket region (Al Hassakeh and surrounding areas) where the majority of crops are grown and has also turned up the heat on Syria with the Caesar Act sanctions. These sanctions serve no purpose other than to tighten the noose on the Syrian civilian population and starve them of resources. Syria’s economy has collapsed, its currency in freefall, and nearly 60 percent of the population is food insecure in a country that used to be self-sufficient and a net exporter of wheat. Not to mention the United States is currently plundering Syria’s oil fields. The US shamelessly states that its goal is to deprive the Syrian government and by extension the Syrian people, of one of their most valuable resources (oil accounts for around 25% of government revenue).

Although their regime-change strategy has failed for now, this scorched-earth policy is advantageous to Western interests because it keeps Syria in a constant state of chaos and helps Israel create a buffer beyond just the occupied Golan Heights, but also more generally as Syria is now unable to defend itself, defend its neighbors, and subject to continuous airstrikes and embargos.

Q: US Democrats expressed concerns as then-president Trump’s orders to bomb Syria was against the law. But the same order was issued by President Biden to bomb Syria again. What is your take?

A: Both Democrats and Republicans are on the same page when it comes to imperialism and their fealty to corporations. There is no difference among them in that regard except in decorum. After Trump bombed Syria in April 2018, over an alleged chemical gas attack in Douma which turned out to be staged, then-Senator Kamala Harris questioned the “legal rationale” behind the strikes. Some Democrats criticized Trump by saying it was a
breach of constitutional powers– but none of them fundamentally questioned whether these alleged chemical attacks had even taken place, to begin with. The team of scientists sent by the Organization for the Prohibition for Chemical Weapons had not even arrived in Syria yet to determine what had happened. They issued mild statements of rebuke while also stating they were glad Assad was being “punished”– which goes to show their objectives fundamentally remain the same, no matter who is in power.

Biden’s supposed “justification” for bombing Syria on February 25th, 2021 was that he was acting in self-defense.
This is of course an absurdity; Syria is not a threat to the United States nor has it attacked the United States.

Unsurprisingly, Democrats have largely chosen to side with him on the issue while others, including so-called “progressives” like Alexandria-Ocasio Cortez, have remained completely silent despite criticizing Trump for bombing Syria in 2018, calling him a ‘mad king’. This really shows you where their allegiances lie and how far their “progressivism” extends.

The Authorization for Use of Military Force (AUMF) of 2001 and 2002 were the authorizations from Congress for Bush to invade Afghanistan and Iraq. Specifically, the AUMF of 2001 broadly authorizes force against those who “planned, authorized, committed, or aided the terrorist attacks that occurred on September 11, 2001, or harbored such organizations or persons.”. This ambiguous language essentially gives the president a blank check to conduct military strikes anywhere and has been distorted and manipulated by every president since in order to expand the “War on Terror” into 19 countries. Trump even used the 2002 AUMF to try and justify his assassination of General Soleimani. However, Congress would not ever go after him for that, let alone any other sitting or former president, despite all this talk of how Trump posed a unique danger to US democracy.

Indeed, no matter who is in charge, the warmongering remains the same. You will not see many Democrats or Republicans voicing support to repeal the AUMF anytime soon. War is a racket, and the United States excels at it. It is no accident you have a revolving door between Washington DC and the private sector, and that the new Secretary of Defense Lloyd Austin is a former board member of the weapons manufacturer Raytheon.

Q: Is there justification for the US President to authorize a military strike that is not in self-defense against an imminent threat without congressional authorization?

A: The constitution clearly says that the president is the commander-in-chief of the United States Armed Forces; however, that the power to declare war resides with Congress. Although the president can respond to imminent threats, the War Powers Resolution of 1973 stipulates that the president must notify Congress in absence of a declaration of war or prior statutory authorization. Consultation and follow-ups with the Legislative branch are a must and the entire point of the resolution is to limit the Executive’s reach in matters of war.

If Congress has already issued an Authorization for Use of Military Force (AUMF), residents will operate within that framework and cite it to justify any action they take. What presidents have often done is to abuse this and distort its legal interpretation e.g. Bush’s crimes in Iraq, Obama’s drone strikes in Pakistan, Trump’s assassination of General Soleimani. On the other hand, if Congress has not issued an AUMF, like in the case of Biden’s bombing of Syria, then the president will simply cite self-defense as the justification– which is exactly what Biden did– even if it is not true. In either case, whether an AUMF has been issued or not, it seems Congress allows presidents to proceed unchecked– because Congress agrees with their imperialist agenda. One must not forget that even in the case when Congress issues an AUMF and agrees with the president’s military action: US law does not supersede international law. For example, just because the US Congress voted to invade Iraq does not mean that this invasion was morally or legally justifiable.

While Biden cites Article 51 under the United Nations Charter as the United States’ right to self-defense, one has to wonder how Article 51 would even begin to apply in this context. Syria has not attacked the United States, nor are the two nations (at least officially) at war. Moreover, if the targets were so-called “Iranian-backed militias”, the same rationale still applies. These bombings also violate Article 2.4 of the United Nations Charter which asserts Syria’s sovereignty and prohibits the use of force against other member states. Some legal scholars might go on to argue that self-defense under Article 51 only applies against other states, not “militias”. Some might also question how the United States can argue self-defense when its very presence in Iraq is illegal, to begin with; the result of an illegal invasion in 2003? At best Biden’s pretext for bombing Syria is dubious, and at worst downright illegal and outrageous. I think most rational people can clearly see it is the latter.