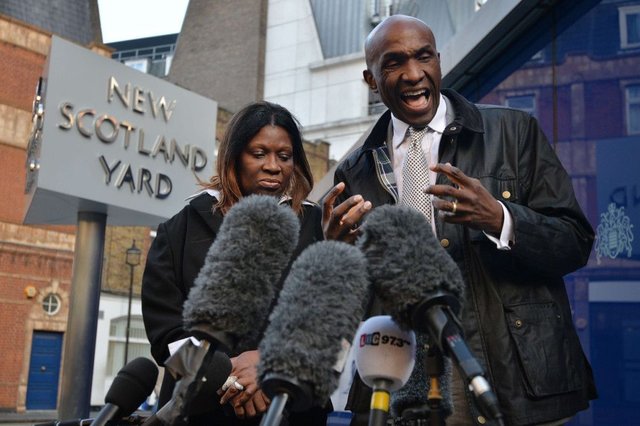 This Thursday May 6th, Londoners will head to the polls to elect a mayor. In the ranks of the hopefuls is Nims Obunge, a Nigerian pastor and politician who focus more on aspiration than the history of the black experience. His work with gang members and violent offenders has convinced him that without a systemic approach to the root causes of crime, nothing will change.

Londoners have a diverse array of choices that reflect their city’s status as the largest in Europe and one of the most multicultural and edgy places on the planet.

There are black, white and brown candidates competing on behalf of established political parties, including the frontrunner and incumbent, Sadiq Khan, an Asian Labour Party member who has been mayor since 2016.

And there are black, white and brown independents such as a slickly-packaged American called Brian Rose and Nims Obunge, a Christian pastor and son of a career diplomat whose extended family is firmly rooted in the oil-producing creeks of Nigeria.

Brexit and the coronavirus pandemic (which has killed 15,000 Londoners) have hit Britain’s capital badly on many different levels. Its financial services headquarters, the once almighty City, is struggling to cope with capital flight.

Tourism, meanwhile, has almost ground to a halt. The entertainment, hospitality and retail sectors have seen much better days. About 300,000 Londoners have lost their jobs and a million plus are currently furloughed.

Then there are the same old problems that existed before recent bombshells, the usual headaches that most conurbations routinely grapple with: The shortage of affordable housing, crime, pollution and so on and on and on.

The winner of the mayoral race will be responsible for the wellbeing of 8 million inhabitants and Obunge insists that he has what it takes to tackle a whole host of complex socio-economic, political and managerial challenges.

He is promising to create a Covid Recovery fund, combat crime and get to grips with transport, housing, environmental, health, education issues.

The Africa Report met Obunge at his Haringey office.

Why did you choose to be an independent, given sponsorship by a mainstream party is a more sure route?

Nims Obunge: I have been a Deputy Lieutenant to Her Majesty Queen Elizabeth’s Lord Lieutenant for Greater London. As the sovereign’s representative in his or her area, the Lord-Lieutenant remains non-political and does not hold office in any political party. It is their foremost duty to uphold the dignity of the Crown.

How can you, as a black man, justify your role as a servant of an institution that was involved in colonialism, imperialism and slavery?

The history of the black experience has painfully revealed the base nature of our humanity. Slavery, colonialism and imperialism must never be forgotten as eras of cruelty and total violations of basic human rights.

However, having graduated in Political Science from a Nigerian university (Jos) and worked in the UK for well over 30 years, I am convinced that the future can only be grasped when we glance and learn through the rear and side mirrors of our past, whilst maintaining a clear and focussed view on the road ahead, through the front windscreen. This is the way for each of us to navigate ourselves toward an aspirational future for today and tomorrow.

We must seek to learn from the lessons of the past whilst seeking to take responsibility within those institutions whose global influence shape the future of other nations. In doing so, we ensure that we protect the values and equity that were once overlooked by those who thought themselves superior.

What sort of work have you done in London?

My politics are neither left nor right. They are about taking care of people and supporting the vulnerable, dealing with poverty and addressing injustice. I have chaired the London Criminal Justice Board Advisory Group.

In Haringey, there was a time when we were sending more children to prisons than to universities. Fortunately, this has changed in recent years because I and others have focussed on encouraging youngsters to believe in themselves and seek educational and employment opportunities.

Some think that some of the black community’s problems in the UK – crime, teenage pregnancy, absent fathers – are self-inflicted? Do you agree?

I prefer to look at the root causes of crime and strengthen the support structures that surround disadvantaged and traumatised youths, many of whom come from very troubled backgrounds and have been let down by the system. I work with adults who need help with parenting and with children who need appreciation. I visit prisons. I meet and counsel gang members.

I have seen so many people turn their lives around because of such guidance. I’ve hired a guy who was jailed for murder and another who shot a policeman. Both have gone on to do things like mentoring school children to avoid crime.

What is the achievement you are proudest of?

It’s hard to pick just one achievement I am proud of, but I am very pleased that my team of volunteers has been able, in partnership with the Peace Alliance, the Felix Project and the Freedom Ark church – to launch a Community Food Hub as a direct response to hunger and food poverty in our community. We feed between 50 and 100 needy families every single week.

What are the first steps you will take if you win?

I will call a truce against gang warfare, set up a programme for offenders who need to be trained to change their outlooks and immediately establish a Covid-19 Recovery Plan for businesses that need to get back on their feet.