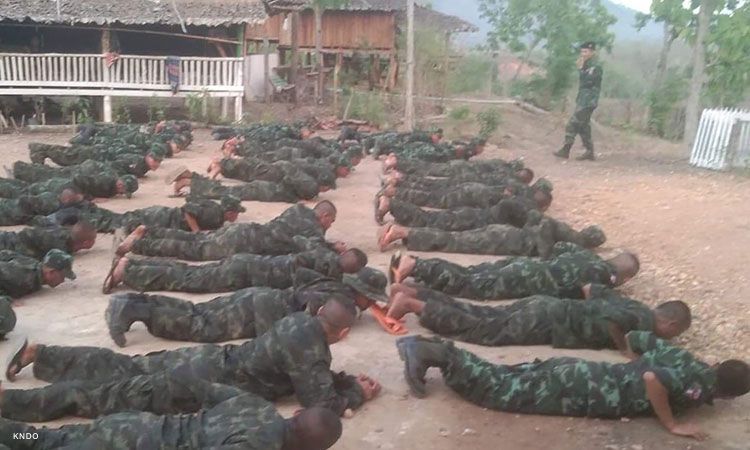 A dozen armed recruits crawl along a dusty pathway, the cicadas masking any sound of their approach towards their target, a small village in the jungles of Myanmar.

The ambush scenario is fabricated but the threat they are training for is real: a military junta that seized power in a coup on February 1, and embarked on a brutal crackdown on any perceived opposition to its rule.

Many of those who have fled to the jungles are members of the Civil Disobedience Movement (CDM) — which has seen thousands of white- and blue-collar workers, including medics and teachers, as well as engineers and factory workers, leave their jobs to disrupt the economy in resistance to the coup.

Now they want to know how to defend themselves from Myanmar’s military, known as the Tatmadaw, which continues to shoot people dead in the streets, has deployed rocket-propelled grenades and mortars against its own citizens, and hunts those wanted for arrest in terrifying nighttime raids on homes, according to the UN.

So they have traveled to the county’s borderlands, to areas control by ethnic armed groups that have been fighting the military, central government and each other for greater rights and autonomy, on and off for 70 years, to be taught how to fire a gun.

He heads up a free basic training program. “This is a responsibility to protect life,” he said. “If we don’t train them who’s going to help them?”

The increasingly violent tactics used against protesters and bystanders has led to more than 760 deaths, according to advocacy group Assistance Association for Political Prisoners (AAPP), although they say the actual death toll is likely far higher.

Nerdah Bo Mya said not one of the 200 anti-coup protesters he has trained had held a gun before and many were still in college. “They’re quite young, their age is around 24, 25 — and some are nurses and also some doctors and medical staff,” he said.

As well as being told how to handle weapons, they are prepared for the physical hardships of combat, shown first aid techniques and taught basic marksmanship.

The KNDO is not the only armed ethnic group offering CDM members training. Footage from a number of ethnic areas shows recruits chanting slogans, such as “for the people,” “for our freedom” and “for our independence.”

The military junta has not responded to CNN’s request for comment on these camps. On May 4, however, the military leadership published a statement in the state-run New Light of Myanmar calling on those who had traveled to ethnic areas or overseas to come home.

Once they have received the training, the idea is for the men and women to return to their cities and pass on their knowledge to fellow protesters.

One 18-year-old, who was manning a roadblock in the city of Bago last month when dozens were killed by the military, said many of his comrades had traveled to the ethnic areas for training. He had stayed behind.

Asking to remain anonymous for his safety, the teenager said: “We have two groups, one to protect the neighborhood and another went to get the training and they will come back and teach us what they have learned.”

Nerdah Bo Mya acknowledges it is a very one-sided battle on the streets of Myanmar.

“We told them they have to be wise and we have to fight with our head and not with our heart,” he said, acknowledging that the Tatmadaw is a highly trained fighting force. It ruled Myanmar for more than half a century through brutality and fear, turning the country into a poverty-stricken pariah nation.

Nerdah Bo Mya said the CDM members need weapons to have a chance against the Tatmadaw, but would not say whether his group had provided any — or whether bomb-making was part of the course.

He criticized China and Russia for enabling the military leadership, saying the rest of the world needs to support the CDM movement, and singled out the United States.

China and Russia are the largest and second-largest suppliers of arms to Myanmar. Both have agreed to United Nations resolutions condemning violence against peaceful protesters but not condemning the coup specifically and have resisted a UN arms embargo on the country.

So far, US President Joe Biden has condemned the violence being used against protesters and has imposed sanctions on military leaders and some military-led businesses.

Historical fight between the military and ethnic minorities

The Myanmar military’s sustained conflict with ethnic minorities has displaced hundreds of thousands of people, and rights groups have long linked soldiers to atrocities and human rights abuses in ethnic regions, including massacres, rape and other forms of sexual violence, torture, and forced labor.

In 2016 and 2017, the military launched a brutal campaign against the Rohingya Muslim minority in Rakhine State, committing atrocities which led to more than 740,000 Rohingya fleeing into neighboring Bangladesh in 2017 alone, prompting a genocide case to be heard at the International Court of Justice.

Amnesty International reported in 2017 that ethnic minorities in Kachin and the northern Shan State had also suffered abuses from the ethnic armed organizations, including forcible recruitment.

In Karen State, Nerdah Bo Mya says ethnic armed organizations feel they have an obligation to work together with anti-coup protesters to rid the country of military dictatorship.

“We have heart for these kind of people, because we have gone through this ourselves and we know what kind of pain, what kind of suffering… what kind of atrocities they’re going through so we can put ourselves in their shoes.”

The violence wielded by the military in the big cities like Yangon and Mandalay have forced some Bamar people to reckon with their past — some are for the first time acknowledging and even apologizing for not recognizing or standing up for the ethnic struggles, which are far from over.

Fighting has intensified in the country’s mountainous north and southeastern border areas following the coup.

Armed clashes between the Myanmar military and another Karen armed group — the Karen National Liberation Army — have displaced about 40,000 people, according to the UN Office for the Coordination of Humanitarian Affairs (UNOCHA).

The military has conducted airstrikes and mortar shelling on KNLA bases and villages. Last week, the KNLA seized a military outpost in a jungle area close to the border with Thailand’s Mae Hong Son province.

On Monday, northern rebel group the Kachin Independence Army (KIA) said it had shot down a military helicopter near the town of Moemauk in Kachin state, after days of military air raids.

There is no doubt that three or four weeks of basic training does not equip these doctors and students to fight against a well-armed military. But Nerdah Bo Mya says they will return to the cities better equipped mentally, at least.

For students to seek out ethnic armies shows how severely the security situation in Myanmar has deteriorated in just three months.

Those once medically trained to save lives are now learning how to defend them in urban battle. That only raises fears the days and weeks to come in Myanmar will become more violent.