The task is clear for the United States: beat Iran in a politcally charged World Cup match or go home.

U.S. players have been praised as the best generation of American soccer. But they finished third behind Canada and Mexico in World Cup qualifying and now face a must-win final group-stage match.

“The most important thing is that we control the outcome of our journey in this tournament with the last game against Iran,” midfielder Weston McKennie said. “So the next thing is just to go out and get three points against Iran.”

A draw or a loss would eliminate the Americans, who tied Wales 1-1 and England 0-0. England leads the group with four points, followed by Iran with three, the U.S. with two and Wales with one.

“We got to win the game,” midfielder Gio Reyna said. “We’re not really thinking about anything else, just three points and then we’re through.”

Iran famously beat the U.S. 2-1 in a 1998 World Cup match in France that eliminated the Americans and caused thousands of flag-waving fans to greet the Iranians when they returned home. In the leadup to the rematch Tuesday, the U.S. Soccer Federation angered Iran’s government by briefly displaying Iran’s flag on social media without the emblem of the Islamic Republic. 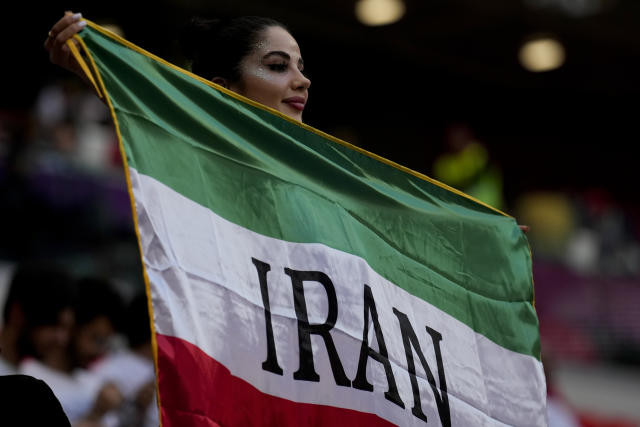 For the U.S., this year’s situation is similar to 2010, when the Americans were on the verge of elimination in the last round of group play before Landon Donovan’s stoppage-time goal beat Algeria 1-0.

“I just hope we don’t leave it to the 90th-whatever minute,” said Stu Holden, a midfielder on the bench that night and now a Fox commentator. “It would be pretty cool to call a last-second U.S. winner, but selfishly I’m quite OK with us just getting that done early and moving on to the round of 16 because that that would be a lot better for my blood pressure.”

Iran is coached by Carlos Queiroz, who as a U.S. Soccer Federation adviser in 1998 wrote a player development blueprint aimed at winning a World Cup by 2010. Iran’s attack is led by Porto’s Mehdi Taremi, who has five Champions League goals this season.

Iran rebounded from a 6-2 opening match loss to England with a 2-0 upset of Wales, putting the team in position to advance for the first time in six World Cups. Midfielder Alireza Jahanbakhsh of Feyenoord is suspended after picking up a yellow card in both his first matches in Qatar.

Goals have been a struggle for a U.S. team, which got just three from forwards in 14 World Cup qualifiers.

U.S. coach Gregg Berhalter knows that has to change.