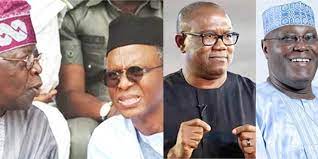 The delegates said El-Rufai is planning to live abroad after his tenure as governor and only the Vice Presidential role could keep him in Nigeria.

This plea was made when Tinubu met with the 16 Kaduna APC delegates to canvass for their votes ahead of the party’s presidential primary election.

The meeting was held on Thursday, May 12, 2022, had the former Governor of Borno State, Kashim Shettima, former Economic and Financial Crimes Commission (EFCC) Chairman, Nuhu Ribadu, and other dignitaries in Tinubu’s retinue.

The former Lagos State Governor had assured the delegates that he was confident about his prospects of succeeding President Muhammadu Buhari as Nigeria’s next president while taking a dig at other APC aspirants.

“Some are running, I don’t know where they are going but I am going to the Villa,” Tinubu had said.

The delegates had unanimously endorsed Tinubu after El-Rufai asked them “are you with Asiwaju?”, to which they rose to their feet all at once, shouting yes.

Speaking on behalf of the Kaduna delegates, the lawmaker representing Sabon Gari, Kaduna Federal Constituency, and Chairman, House Committee on Ports and Harbours, Garba Babawo, made a plea to Tinubu to consider the governor as his running mate, reported Punch.

Babawo said, “We have a request for you (Tinubu), sir. What I’m about to say I did not tell our governor because I know if I tell him he would not support it. We want you to take our governor as your running mate.