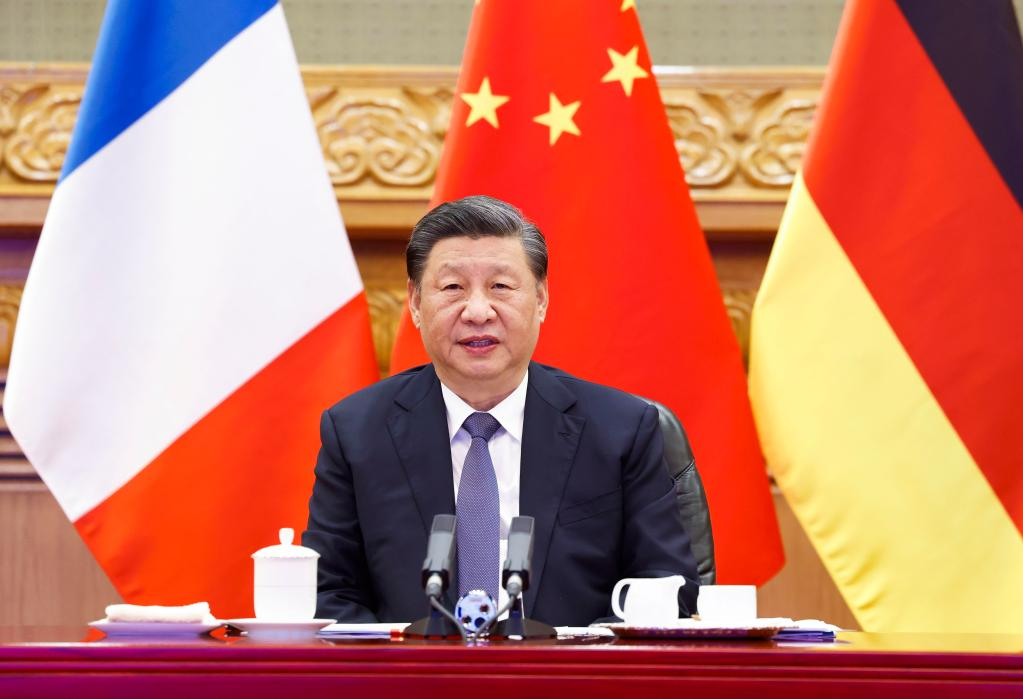 President Xi Jinping held a video meeting with German Chancellor Olaf Scholz on Monday and urged the German leader to work with China and other countries to prevent the Ukraine conflict from becoming an “unmanageable situation.”

“All efforts must be made to avoid the intensification and expansion of the Ukraine conflict, which could lead to an unmanageable situation,” Xi said in the video call, according to Chinese state radio.

In the meeting, Xi highlighted that the current international situation is continuing to change in a complex manner, and the difficulties and challenges to global security and development have increased significantly.

The two leaders had an in-depth and frank exchange of views on the situation in Ukraine. Xi emphasized that both China and Germany have a lot of influence across the globe and, given the current situation, the two countries need to maintain healthy and stable relations with each other, as it will not only benefit the two nations but also contribute towards world peace and stability.

He said it is important to advocate for “genuine multilateralism, uphold international fairness and justice, and join hands to safeguard the key role that the United Nations plays in international affairs.”

Xi stressed that over the past 50 years, the two countries have increased their cooperation to achieve common development objectives. He said China’s original intention to further develop Sino-German relations remains unchanged, as does its confidence in the opportunities for the two countries to continue to work together.

The Chinese leader said that Beijing and Berlin must focus on expanding their cooperation in new areas such as protecting the environment, trading services, artificial intelligence and digitalization.

Xi recognized that China and Europe are comprehensive strategic partners, with both regions presenting opportunities for each other. He said that the common interests of China and Europe far outweigh any differences that they may have.

He added that China supports the EU’s strategic autonomy and that China’s relations with the bloc are not impacted by any third party and that both sides should strengthen communication and enhance mutual trust. Referring to the ongoing conflict in Ukraine, President Xi said that in the face of the current geopolitical crisis, the two sides should advocate dialogue and cooperation.

To aid the post-pandemic recovery challenges, they should strengthen their development strategies and policy coordination, and promote the stabilization and growth of the global economy.

“I hope the German side will play a positive role in the stable and healthy development of China-EU relations,” he added.

Chancellor Scholz said that the relations between the two countries have developed very well in recent years and that Germany is keen to celebrate the 50th anniversary of diplomatic relations with China.

He also said that they would like to maintain close communication at all levels, and conduct dialogue on important issues such as ensuring the stability of global supply chains and macroeconomic policy coordination, as well as strengthening cooperation in trade and investment, climate change, combating epidemics, healthcare, education and culture.

The German leader said that his country welcomes China’s commitment to expand a high level of openness to the outside world, which will bring more opportunities for Germany.

Xi stressed that China has always stood on the side of peace, and has been promoting talks and pushing for the situation to cool down. The crisis in Ukraine has once again pushed European security towards a critical crossroads.

He said the European side should show historical responsibility and use political wisdom to focus on achieving long-term peace in Europe, and seek to promote a responsible solution.

“China welcomes all efforts of the international community that are conducive to persuading and promoting peace talks, and all parties concerned should support Russia and Ukraine in achieving peace through negotiations,” he added.