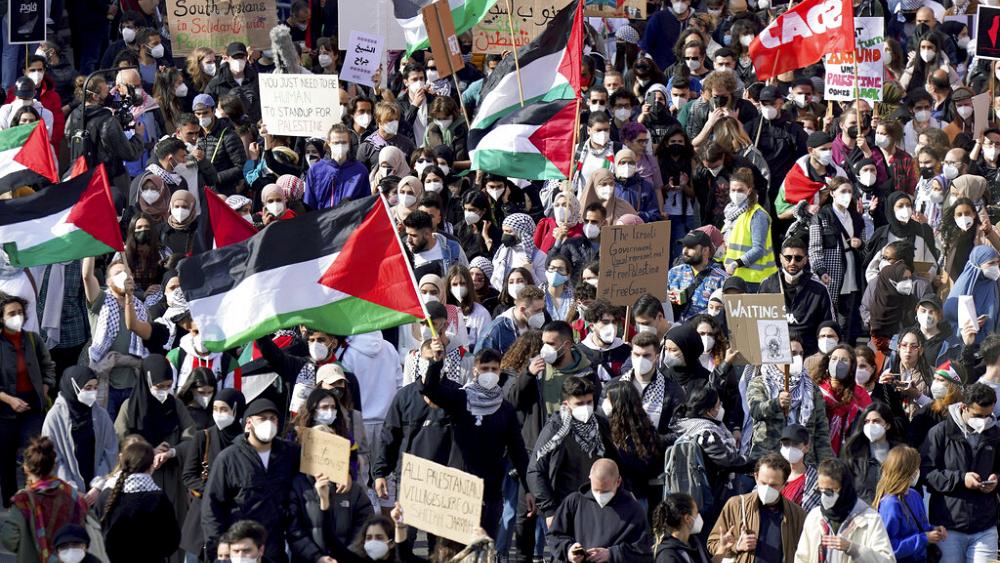 Thousands of people have taken to the streets throughout many Western countries in support of the Palestinian cause of liberation from Israeli occupation and aggression.

The rallies took place across Canada and European countries on Tuesday. The participants denounced the escalation of the Israeli regime’s brutal attacks on Palestinian worshippers at the al-Aqsa Mosque’s compound in the holy occupied city of al-Quds.

Israeli forces have wounded and rounded up hundreds of Palestinians during the attacks that have seen a rise since the beginning of the fasting month of Ramadan. Illegal Israeli settlers have, meanwhile, been freely violating the compound under the Israeli military and police force’s protection.

Palestinian resistance movements in the nearby Gaza Strip have been warning the regime that it would have to bear the consequences of the flare-up that it has brought about in al-Quds and beyond.

Hundreds held a “Free Palestine” rally throughout the city of Toronto in Canada in condemnation of the Israeli violence, chanting anti-Tel Aviv slogans and demanding an end to the regime’s occupation of Palestinian territories.

Thousands demonstrated in Berlin, urging the cessation of the Israeli regime’s attacks on the worshipers. The German police reportedly rounded up a number of the protesters.

Hundreds raged against the Israeli atrocities throughout the city of Innsbruck in Austria, expressing solidarity with the oppressed Palestinians.

READ ALSO: Police arrest 7 suspects after 2 die at a wedding ceremony in Bauchi

The London rally was held in front of the Israeli embassy, with representatives of several Muslim and anti-war societies in attendance.
The participants urged the White Hall to react to the Israeli atrocities in the same way that it treated the Russian military operation in Ukraine. The protesters included a large number of rabbis, one of whom set fire to the Israeli flag.