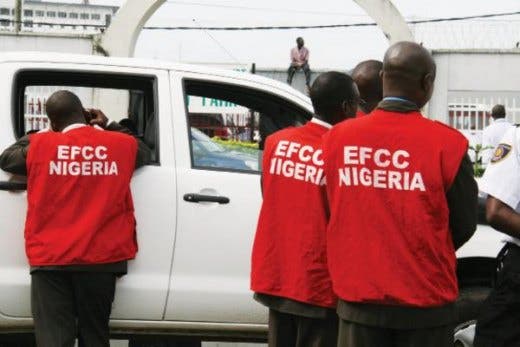 The Economic and Financial Crimes Commission (EFCC) has warned that hoteliers who allow Yahoo Boys to check into their facilities risk being prosecuted and jailed.

The Economic and Financial Crimes Commission (EFCC) has warned that hoteliers who allow Yahoo Boys to check into their facilities risk being prosecuted and jailed.

In a statement on its official Facebook page, the anti-graft agency said hoteliers could bag a five-year jail term for allowing cybercriminals access to lodging in their hotels.

The warning came after Peoples Gazette’s report exposed how the anti-graft agency violently seized a Lagos hotel access card and broke into guests’ rooms in an overnight raid.

Many guests, including couples, were passing the night at the mid-size hotel when EFCC agents broke in at about 4:00 a.m. Some of them said they were naked under the duvet during the raid, adding that they were not even allowed to dress up before being interrogated by the officers, who said they were on a manhunt for suspected Internet fraudsters.

However, EFCC, in the statement, alleged that what played out during the raid was a regular antic used by Yahoo Boys in buying time to destroy incriminating items in their devices before arrest.

“In the course of the operation, the (EFCC) operatives encountered women in some of the rooms who pleaded nudity to stop them from arresting their targets. This has lately become the antics of cyber fraudsters who procure ladies to plead nudity as a decoy, to allow their consort destroy incriminating items in their devices before arrest,” the EFCC statement said.

Warning hoteliers against allowing cybercriminals into their facilities, the EFCC said hoteliers would be contravening section 3 of the Advance Fee Fraud and Other Fraud Related Offences Act if they continued to allow Yahoo Boys to check into their hotels.

According to EFCC, the act recommends five years’ imprisonment for hoteliers who are accomplices of cybercriminals.

“The hotel owner perhaps is ignorant of the fact that he could become an accomplice and liable for allowing his premises to be used for cybercrime, in contravention of section 3 of the Advance Fee Fraud and Other Fraud Related Offences Act,” the anti-graft agency claimed.

It added, “The section provides that a person who, being the occupier or is concerned in the management of any premises, causes or knowingly permits the premises to be used for any purpose which constitutes an offence under this act is guilty of an offence and liable on conviction to imprisonment for a term of not less than five years without the option of a fine.”