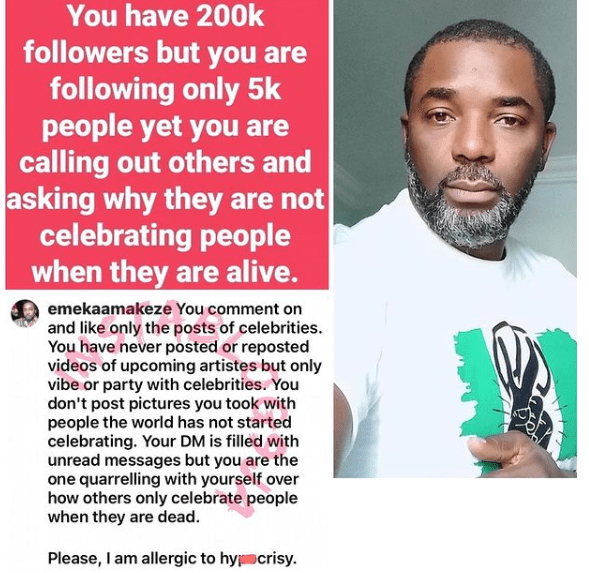 Nollywood actor, Emeka Amakeze has slammed his colleagues for nagging about people not being celebrated when they are alive. 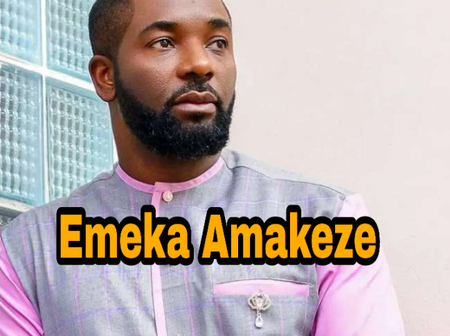 You would recall following the death of legendary musician, Sound Sultan, many celebrities have posted him on their respective social media page and mourned him but some persons including music executive, Soso Soberekon and Ibiere, the wife of Julius Agwu have condemned those who posting Sound Sultan as they pointed to the fact that they did not check on him whilst he was sick but they are on social media publicly celebrating him.

Sharing a photo of himself and Sound Sultan together, Soso Soberekon wrote;

How many of you checked on him when you heard he was sick? The news was everywhere. Now everyone is posting now that he’s gone. Rest In Peace @soundsultan you were a very great & amazing guy.

Sharing his opinion on this, Emeka Amakeze claimed those chiding others for celebrating the dead are hypocrites as he cited that they have 200k followers on social media but they only follow 5k people yet they are calling out others and asking why they are not celebrating people when they are alive.

You comment on and like only the posts of celebrities. You have never posted or reposted videos of upcoming artistes but only vibe or party with celebrities.

You don’t post pictures you took with people the world has not started celebrating.

Your DM is filled with unread messages but you are the one quarrelling with yourself over how others only celebrate people when they are dead.

Please, I am allergic to hypocrisy.

He also noted that they have never posted or reposted videos of upcoming artistes, but only vibe or party with celebrities and also don’t post pictures they took with people the world has not started celebrating.

Emeka concluded by stating that he is infuriated by such hypocrisy.