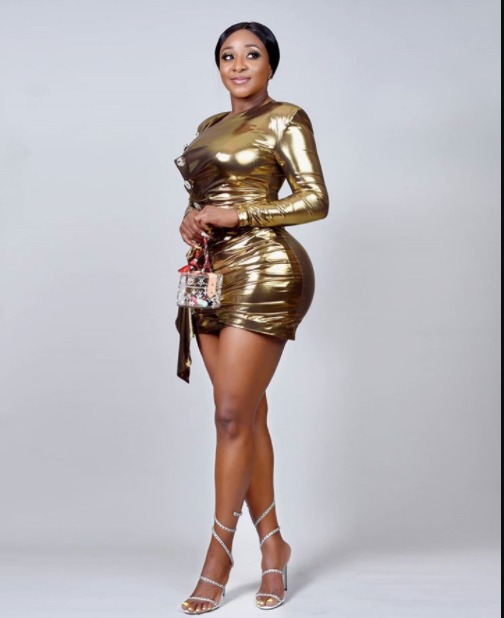 Ini Edo who started out as a teenager struggling to find her true identity has grown to become one of the most popular actresses in the industry.

Nollywood actress, Ini Edo has penned a lengthy message as she clocks 20 years in the Nigerian movie industry.

She began her film career in Nigeria’s movie industry, popularly known as Nollywood, in the 2000 and is currently 20 years active in the industry.

She was born April 23, 1982 in Uyo, Akwa Ibom State in the southern part of Nigeria but grew up in Calabar in Cross River State, Nigeria.

Going by her available date of birth, she’s currently 38-year-old, just 2 away from 40.

She is the second child in a family of four children. Her mother was a teacher and her father, a church elder.

Due to her undying passion for acting, she started acting at a very tender age. And this has since fueled her zeal and ambition.

After her secondary education, she headed to the prestigious University of Uyo in Akwa Ibom State in the south southern part of Nigeria where she graduated with a National Diploma (OND) in Theatre Arts.

As a young lady with love for education, she never stopped at just having OND certificate, she proceeded to University of Calabar in Cross River State, Nigeria and graduated with a Bachelor’s Degree in English Language. No wonder her fluency in the use of English language.

In 2004, Ini Edo rose to fame after starring in the Nollywood blockbuster movie “World Apart”, alongside Kenneth Okonkwo and Lis Benson.

In 2005, her role as a maid in the blockbuster Nollywood movie “World Apart” earned her the award for Most Promising Actress in Nigeria at the Africa Movie Academy Awards.

Ini Edo has featured in over 100 Nollywood movies. Some of the movies she has acted include World Apart, Thick Madam, Royal Gift, Blind Kingdom, Ghetto Queen, Power of Beauty, and many more.

In 2014, she was announced as a judge for the Miss Black Africa United Kingdom Beauty Pageant.

In 2016, Ini Edo was appointed The Special Assistant to the Akwa Ibom State Governor on Culture and Tourism.

Ini Edo is originally from Uyo, Akwa Ibom State, but was born and bred in Calabar, Cross River State both in the south southern part of Nigeria. And asides acting, she’s a seasoned model.

She currently has an estimated net worth of nearly $4 million, making her one of the wealthiest and most influential actresses in Nigeria.

On social media influence, Ini Edo as at the time of filing this articles, has over 8 million followers on her verified Instagram page.

In 2011, Ini Edo was honored by the Nigerian government with a National honor of Member of the Order of the Federal Republic (MFR).

Ini Edo was married but now divorced and is currently single and hopes to get married again someday.

“I’ve been all kinds of mood today and these pictures videos and all your beautiful comments just literally lifted my spirit .

Thank you so much and yes it’s been 20years of being in your faces. I came out here as teenager struggling to find my true identity.

Made mistakes, made successes but what I never did was give up on myself.

will keep being in your faces so let me apologize In advance cos I ain’t gonna stop improving on myself as a person, Career wise, as an entrepreneur infact In every aspect of my life.

Thank you all so very much. cheers to many more years of awesomeness…. This is also to all my brown skin girls … now this is a movement and am proud of us . #blackdontcrack# Brownsugar deliciousness  Love you all so much.”