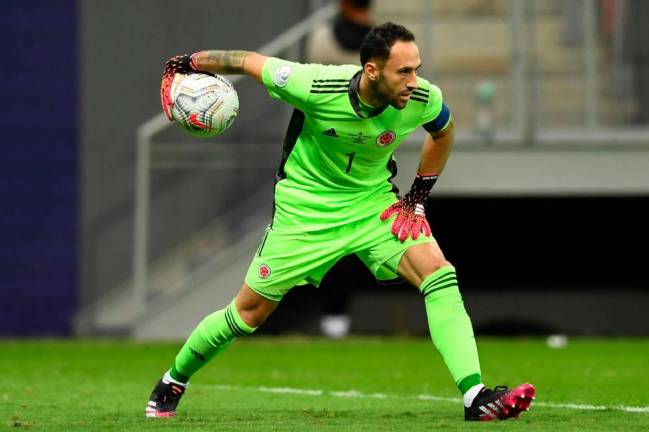 Goalkeeper David Ospina was the hero as Colombia beat Uruguay on penalties in Brasilia on Saturday to reach the Copa America semi-finals.

Ospina saved two spot-kicks in the shoot-out on the day he earned his 112th Colombian cap, moving clear of the previous national record he shared with the iconic Carlos Valderrama.

There was little to report in a drab 0-0 draw over the regulation 90 minutes before the quarter-final tie went straight to penalties.

Ospina saved from Jose Gimenez and Matias Vina while Colombia scored all four of their penalties.
It was a huge disappointment for Uruguay’s star forward pair Edinson Cavani and Luis Suarez, who both converted their spot-kicks but almost certainly have played in their last Copa.

It took almost half an hour for either goal to be threatened and when it was — Duvan Zapata found a yard of space to force a save out of goalkeeper Fernando Muslera — the Colombia striker was flagged offside.

Spaces started to open up and Cavani then lashed wildly wide, but again an assistant’s flag went up.

Both Zapata and Cavani were proving a nuisance for their opponents’ defenses and it was the burly Colombian whose determination created a chance for Luis Muriel on the stroke of halftime, but his teammate for club and country lashed well wide.

Uruguay’s Nahitan Nandez came closest yet to breaking the deadlock early in the second half with a misdirected cross that Ospina had to tip away from the top corner.

Uruguay was getting on top as Giorgian de Arrascaeta brought a save out of Ospina and Suarez had a shot charged down.

Zapata was almost fighting a lone battle up front for Colombia, coming close with a pair of headers, but in truth, there was little to get excited about.