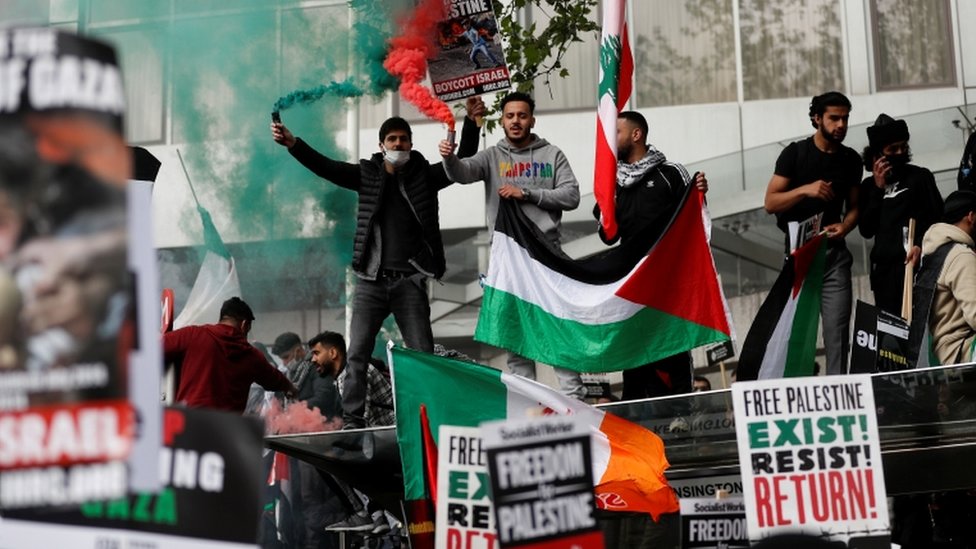 Protesters have prevented an Israeli container ship from docking at one of the busiest seaports in Canada, in response to the latest war on the besieged Gaza Strip that left hundreds of people dead last month.

The activists formed a picket line at an entrance to the Fairview container terminal and did not let the vessel, identified as the Volans and owned by Israeli shipping company ZIM, berth at the Port of Prince Rupert.

The protesters said they were acting in solidarity with Block the Boat movement, whose aim is to block Israel from shipping goods to North America in protest at the latest Israeli war.

“We can’t deny that the world is an interconnected place, so the ship that unloads here has an impact on the lives of people on the other side of the world,” Francis Riley, one of the several protesters holding signs, said.

The activists finally left the entrance and allowed the port to continue with other business after the Prince Rupert Port Authority confirmed that the Volans would not be unloaded there.

At least 260 Palestinians, including 66 children, were killed in the Israeli bombardment of the Gaza Strip in 11 days of the war that began on May 10. Israel’s airstrikes also brought widespread devastation to the already impoverished territory.
The Gaza-based resistance movements responded by launching over 4,000 rockets into the occupied territories, some reaching as far as Tel Aviv and even Haifa and Nazareth to the north.

The Israeli regime was eventually forced to announce a ceasefire, brokered by Egypt, which came into force in the early hours of May 21.

Earlier this month, dockworkers in the US Port of Oakland refused to unload the Volans as part of an international boycott campaign against Israeli atrocities against the Palestinians.

The American activists held banners and waved Palestinian flags in support of the movement which seeks to impose an economic boycott on the Israeli regime.

On Monday, a group of pro-Palestine activists occupied a factory in western England, which produces materials used to make fighter jets for the Israeli army.

Palestine Action began taking control of the Arconic factory in Birmingham in the early hours of Monday morning.

Images posted online showed Palestine Action activists sitting on the rooftop of the factory in an attempt to stop its operations, as others sprayed red paint on the factory windows.

The Arconic factory supplies various materials, including sheet metal, to manufacture Boeing and Lockheed Martin military aircraft used by the Israeli military in its latest assaults on the Gaza Strip.