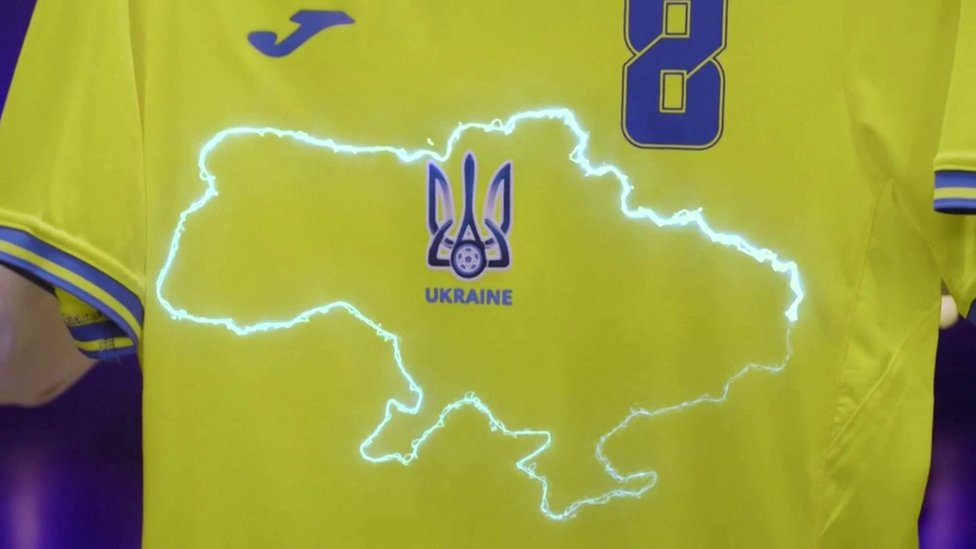 European football’s governing body said the message “Glory to our Heroes”, a rallying cry during the 2014 anti-Russia protests in Ukraine that is featured inside the shirt, was “clearly political in nature”.

On Tuesday, Russia had sent a letter of complaint to UEFA over the yellow jersey which also features on the front the outline of Ukraine including Crimea, which was annexed by Russia in 2014.

The jersey had been paraded by Ukrainian President Volodymyr Zelensky, who was quick to back the shirt after news of Russia’s letter broke.
Comedian-turned-president Zelensky posted pictures on two photographs on Instagram of himself holding a jersey and said it bore “many important symbols that unify the Ukrainian people”.

The presidential press service then released a selfie Zelensky took of himself wearing the jersey.

Posting two photographs on Instagram of himself holding a jersey with the number 95, Zelensky said: “The Ukrainian national football team’s new jersey is in fact not like the others.”

But UEFA said the map would not need to be changed because a United Nations General Assembly Resolution “recognizes the territorial borders as broadly depicted by the design”.

The slogan “Glory to Ukraine” was also approved by UEFA as “on its own (it) may be considered as a generic and non-political phrase of general national significance”.
That chant was also used by protesters who ousted a Kremlin-backed president, Viktor Yanukovych, during the Maidan demonstrations seven years ago.

The slogan has drawn criticism from Moscow for its association with World War II-era nationalist groups who cooperated with the Nazis.

Since annexing Crimea, Russia has backed pro-Moscow separatists in eastern Ukraine. The ongoing conflict there has claimed the lives of more than 13,000 people.

Russia reacted positively to UEFA’s decision, with foreign ministry spokeswoman Maria Zakharova saying “sport is not a battlefield, rather it is a field for competition”.

“Become sporting heroes and you will have glory. Do it that way and not with nationalist slogans saying the motherland should be glorified,” Zakharova wrote on Telegram.

Ukraine begins their campaign at the European Championship on Sunday against the Netherlands in Amsterdam. Drawn in Group C, they also face Austria and North Macedonia.

Russia have been drawn in Group B alongside Belgium, Denmark and Finland. Their first match is against the Belgians in Saint Petersburg on Saturday.