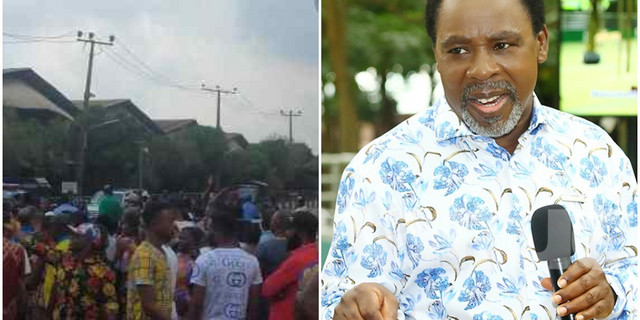 The death of Nigeria’s foremost televangelist brings uncertainties to the church, Ikotun, and more than a million others around the world. It was far from a typical Sunday at the headquarters of The Synagogue, Church of All Nations (SCOAN) in Ikotun-Egbe, Lagos, on Sunday, June 6, 2021.

There have not been the usual Sunday services for more than a year because of the COVID-19 pandemic.

With only the Emmanuel TV Partners Meeting every Friday/Saturday that draws a considerable crowd, Sundays have not been typically busy at the SCOAN headquarters following the suspension of the Sunday service.

Although the government has since lifted the ban on religious gatherings, the now late leader and founder of the mega-church Prophet T.B Joshua had said he was waiting to hear from God before he will resume the church’s services.
The resumption had been gradual, with only the Emmanuel TV Partners Meeting holding every Friday/Saturday while he only preaches via broadcast on Sunday without an audience.

But this particular Sunday drew more people than has been seen since March 2020. SCOAN members trooped to their headquarters, searching for answers following the news that broke the previous night of the death of their founder.

The famous preacher had just finished ministering at an Emmanuel TV Partners Meeting where he spoke on ‘Time for everything’.
“Time for everything; a time to come here and a time to return home after service,” he says in the video that now evokes a poignant feeling.

“God has taken His servant Prophet TB Joshua home — as it should be by divine will,” his church announced in a statement on Sunday.
“His last moments on earth were spent in the service of God. This is what he was born for, lived for, and died for.”

The cause of death was not stated and still not known. Staff at the SCOAN headquarters told Pulse that he died before they got to the hospital, although the source could not tell why the popular preacher was taken to the hospital in the first place.

Pulse was at SCOAN headquarters as early as 6.am on Sunday and met about 100 members standing around in disbelief.

The church entrance was sealed, opened for only staff and residence in and around the church premises.

An unknown man at the gate attended to inquiring members, telling them to go home and that an announcement on what next would be delivered soon.
Yet, none of the members went home, all staying behind, crying and praying for their spiritual leader.

“I heard the news just before I wanted to go to bed but I could not sleep,” a woman in her 50s, Madam Omoyele, told Pulse.

“I stay in Berger and left my house around 5 am to get to this place.”

Even after the church released a statement on social media announcing the death, many members still had doubts.

“It’s impossible that he will die, he has not finished his mission on earth, he cannot die,” another man said.
The crowd grew, and at about 9.am, there were almost 500 people in front of the SCOAN headquarters.

It would grow all day as people trooped to confirm the news.

The death of the 57-year-old preacher has dealt a massive blow and left millions worldwide with uncertainties.

Only a few persons in the Nigerian media know SCOAN or the late Prophet T.B Joshua more than Lucky Onoriode George, who has been covering the church and the pastor for more than 20 years.

He first attended the church in September 2000 as a reporter and from there became a trusted confidant of the preacher.

“He would just call me and invite me to his office where we would discuss religious tourism and some other stuff,” George, a journalist formerly with This Day and The Guardian Nigeria told Pulse.

But not even George, with his insights in the running of SCOAN, could come up with any name that could step in the shoes of Prophet T.B Joshua and continue his legacy.

“It’s tough to even think about the future of The Synagogue. Without T.B Joshua, it’s hard to imagine what would happen,” he also said.

That’s the question in the mind of people around the world who follow the televangelist.

Aside from his services at SCOAN headquarters, which draw visitors from around the world, many also follow his teachings on TV worldwide.

Emmanuel TV, this television network founded by Prophet T.B Joshua, has a wild reach and broadcasts worldwide on various satellites.

His Youtube channel which was recently suspended over allegations of hate speech, had 1.8 million subscribers, the most of any Christian ministry channel worldwide.

His teachings are also shared on social media. On Facebook, he has almost six million followers.

“Hotels, shops, and touts in the district of Ikotun Egbe are doing a roaring trade as church draws visitors from around the world,” the UK Guardian wrote in a 2013 report.

An unconfirmed report on The Synagogue’s Wikipedia page says that six out of every 10 foreign visitors to Lagos are bound for the mega-church.

“It has not been the same; everyone around here has been waiting, anticipating the return of the Sunday service,” a restaurant close to four-story, giant-columned SCOAN told Pulse.

“The business model in Ikotun and environs revolves around The Synagogue. From hotels to restaurants, even landlords make money from short-letting their apartments to visitors from around the world,” said.
The hotel business is popular in Ikotun. Adetunji Street, a street less than 50 meters, has two huge hotels.

One of the hotels on that street is currently undergoing a vast renovation in anticipation of the return of Sunday services at The Synagogue.

“I can’t imagine what is going on in the minds of these business owners,” Ola, a resident at Adetunji Street, told Pulse.

Ola was also a beneficiary of the business opportunities that came with The Synagogue.

“I drove cabs for years. Taking people from this place to the airport or other parts of Lagos and I made lots of money.”
It doesn’t stop at just Ikotun, Stretching to Ejigbo, the next suburb on the east; hotels around that area also enjoyed tremendous patronage from visitors.

Apart from the commercial value of SCOAN, the people of Ikotun and environs were also almost first on the list of T.B Joshua’s generosity.

A well-known philanthropist, the late preacher, regularly brought smiles to the faces of people who live around that area.

From the landlord associations to Police Stations and security agencies, schools, other churches, and even mosques, Prophet T.B Joshua touched everyone.

“There were sets of less privileged persons that he gave money every week to sustain their wellbeing,” Mrs. Bola Adeniran, an Ikotun resident told newsmen.
“We, all the people of the area, are in disbelief over the news and we are praying for God to revive him to continue his good works.”

SCOAN received some people from the media, including Pulse, on Sunday and assured us that they would send updates on what is next for the church in the coming weeks.