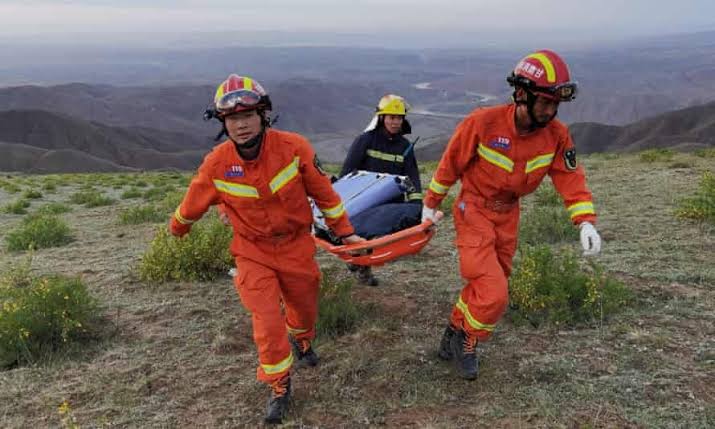 The death occurred after the runners were overtaken by extreme weather, state media reported on Sunday.

Competitors were about 20-30 kilometres into the race, in the remote and rugged Yellow River Stone Forest in Jingtai County, when they were hit by hail, freezing rain and gale force winds at around 1.00 p.m. (0500 GMT) on Saturday, state news agency Xinhua reported.

The agency said that conditions for the runners became difficult as the air temperature dropped to nearly zero degrees.

Some of the 172 participants went missing and the race was halted.

Although race organisers tried to rescue some runners, only the first 24 kilometres of the course are navigable by car, according to Chinese news site The Paper.

The rescue operation concluded early on Sunday, when the last missing runner was confirmed dead, the People’s Daily reports.

Many participants became stranded during the steep and precarious ascent between checkpoints two and three, 24 to 32.5 kilometres into the high-altitude course, The Paper said.

The race began on a warm and sunny day, one participant told The Paper and weather forecasts did not predict the sharp drop in temperatures.

Runners set off in shorts and T-shirts and very few, especially the most competitive runners, packed cold weather gear.

Although organisers required competitors to carry an emergency survival blanket, survivors say these were insufficient and were torn apart by the strong winds.

Text messages from runners, circulated online including on major Chinese news sites, describe people unable to move due to hypothermia, foaming at the mouth and lying unresponsive along the course.

One survivor, who turned back after losing feeling in his digits and nearly losing consciousness, described joining close to 50 others taking shelter in a small wooden hut midway up the mountain, waiting for emergency responders.

The identity of the senders of the text messages could not be independently verified by dpa.

The dead include champion trial runner, Liang Jing, who placed first in all previous editions of the race, as well as hearing-impaired runner, Huang Guanjun, who won the marathon at the 2019 National Paralympic Games.

The mayor of Baiyin, the city responsible for organising the event, publicly apologised and conveyed his “deep sympathies” to the participants’ families.

The provincial Communist Party committee for Gansu has reportedly begun investigating the incident.

Online commentary has been sharply critical of the Baiyin government’s race organisers, with netizens asking if this was “truly a natural disaster or a man-made one” stemming from their recklessness and lack of preparedness.

Although the race organisers in Gansu listed jackets under “recommended” gear, the only mandatory gear competitors had to carry to protect against cold and rain were the survival blankets.

In order to minimise the weight they have to carry, competitive runners will often try to race with as little gear as possible, underscoring the importance of creating comprehensive lists of mandatory equipment for all participants.