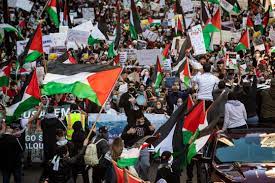 Hundreds of people gathered in downtown Chicago Friday to support the Palestinian people and celebrate the ceasefire between Israel and Hamas.

The group started gathering around 4:30 p.m. at Michigan Avenue and Ida B. Wells., just about 24 hours after fighting between Israel and Hamas ended.

The 11-day war left more than 250 dead — the vast majority Palestinians — and brought widespread devastation to the already impoverished Hamas-ruled Gaza Strip. But the rocket barrages that brought life to a standstill in much of Israel were seen by many Palestinians as a bold response to perceived Israeli abuses in Jerusalem, the emotional heart of the conflict.

Israel claimed it inflicted heavy damage on Hamas but once again was unable to halt the rockets. Even as it claims victory, Hamas faces the daunting challenge of rebuilding in a territory already suffering from high unemployment and a coronavirus outbreak, and from years of blockade by Egypt and Israel.

The conflict brought to the surface deep frustration among Palestinians, whether in the occupied West Bank, Gaza or within Israel, over the status quo, with the Israeli-Palestinian peace process all but abandoned for years.

There remains hesitation on both sides about whether the ceasefire will hold. And while those at the rally Friday chose to celebrate the ceasefire, they also said this is the beginning of a longer, bigger movement to bring justice and freedom to Palestine.

“We just want to live in prosperity, with generations of ids growing up just like we are in America,” said Yousef Kashkeesh, attendee.

“The fact that we withstood it for 11 days, and the unity of the Palestinian people across the globe, which stood at for 11 days. That’s why we came out on the other side and say, This is a victory that Israel has been exposed,” one rally attendee said.

“And let’s just hope that, you know, Hamas will abide by this particular ceasefire. And if that’s the case, there’s a lot of healing that needs to be done” 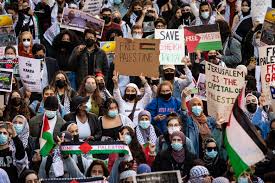 Palestinian Americans believe their movement also helped push the ceasefire deal brokered in part by America, and mainly be Egypt.

“Because of all the protests around the world we got the ceasefire, which obviously doesn’t do much for the Palestinians but it’s a start,” said Faiza Shareef.

The U.S. has long expressed unwavering support for Israel, and sends billions of dollars to aid the country’s defense.

“I think this was, the president was clear at the beginning of this situation, that Israel has a right to defend yourself, and so did Secretary Blinken,” Nasati said.

That doesn’t sit well with Palestinian Americans. They have their own goals.

“Ending the occupation. Not giving $3.8 billion a year to Israel. Not signing a $735 million weapons deal,” said Rayam Falouji, attendee.

READ ALSO: Late Army Chief, six others to be buried in Abuja at 1pm today

They are now rallying social justice movements to join their fight for an independent state.

“They’re beginning to understand the connection between all these things,” said Deanna Othman, Chicago Coalition for Justice in Palestine.

The rally traveled through the streets of the Loop and then ended up at Federal Plaza for more speeches.