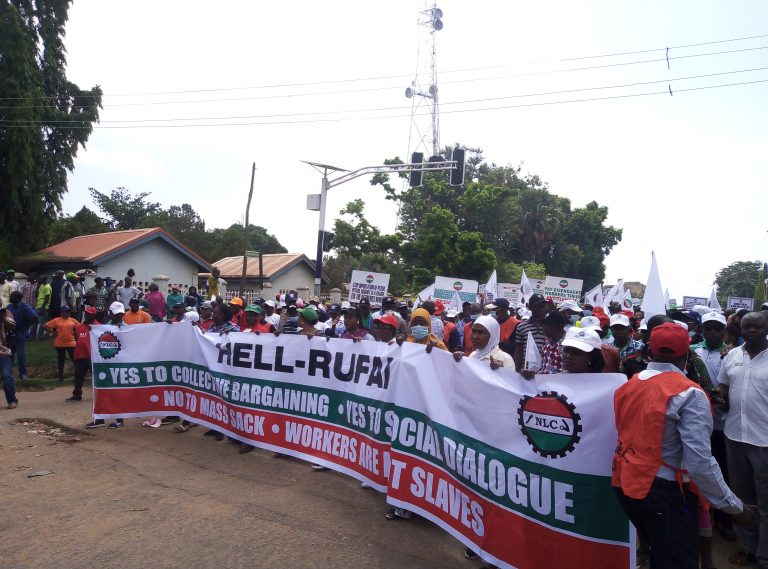 The Nigerian Labour Congress (NLC) says it will not be deterred by attacks from thugs in carrying out their lawful procession against Kaduna State government on mass disengagement of staff in the state.

The Deputy President of NLC, Mr. Amaechi Asugwuni said this while reacting to an attack by thugs on peaceful protesters on Tuesday in  .

Asugwuni alleged that the attack was to deter them from their legitimate rights of actions toward bringing the government to order.

“The thugs used weapons and threw stones on our peaceful protesters, as I speak to you now, we have taken some of them for treatment resulting from serious injuries.

”As a matter of fact, the sponsor or sponsors only made us more determined.

“The only and best way to addressing issues is engagements and dialogue, using violence to address issues of industrial-related matters will not yield results,” he said.

Reacting to the alleged arrest of the NLC President, Asugwuni said: “I don’t want to believe it, I take it as a rumor because no government will take the function of the Police.”

He urged youths in the state to refrain from being used as instruments to unleash violence, as the consequences would fall on them in the long run.

“The youths should shun violence and look for their daily bread, and to those being arrested today, our prayers are for the police to prosecute them.

“If those arrested are for the interest of peaceful existence, we want to know the stations and divisions they are taken to, we also want to know how fast they will be prosecuted so that violence will stop.

“We must not give support to violence under any guise, we urge the youths to be law-abiding and refuse to accept the functions to kill and destroy because the sender’s children are safe somewhere,” Asugwuni said.