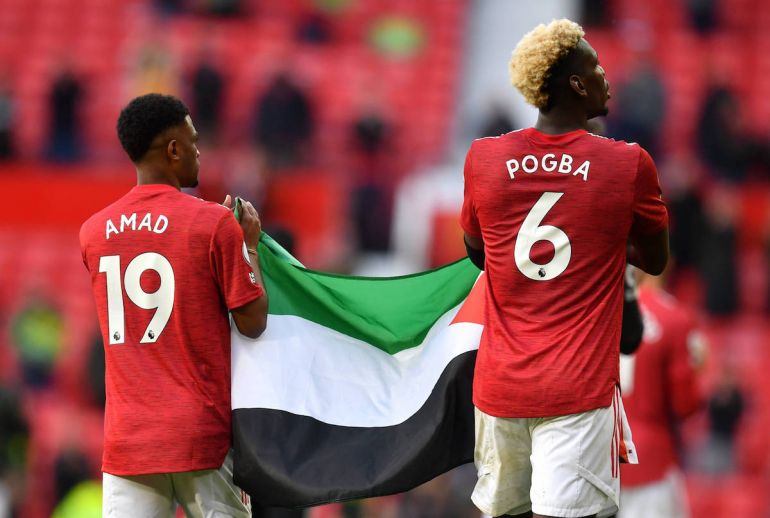 Team-mates’ public display of support for Palestine came as Israel continued its intense bombardment of the Gaza Strip.

The duo’s public display of support for Palestine on Tuesday came as Israel continued its relentless bombardment of the Gaza Strip, which has killed at least 219 Palestinians, including 63 children, and wounded more than 1,500 people since it began on May 10. Twelve people in Israel have died, including two children, by rocket fire from Gaza, while at least 300 Israelis have been wounded.

Pogba appeared to be given the flag by a fan as the players made their way around the pitch during the traditional lap of honour after United’s 1-1 draw with Fulham at Old Trafford.

The French World Cup winner and Ivorian winger Diallo displayed the flag with about 10,000 fans watching after coronavirus restrictions were lifted.

“Pray for Palestine,” Pogba wrote on Instagram after the match, in a post accompanied by a photo showing him carrying the Palestinian flag. “Let’s keep our world safe and free from violence.”

Manchester United manager Ole Gunnar Solskjaer said after the match: “We have players from different backgrounds, different cultures, different countries and we need to respect their views if they differ from someone else’s.”

He added: “If my players think about other things than football, that’s a positive thing.”

Thousands of protesters marched in support of Palestinians on Saturday in major European cities including London, Berlin, Madrid and Paris, as the worst violence in years raged between Israel and fighters in Gaza.

English midfielder Choudhury and French defender Fofana were seen holding a Palestinian flag on the pitch at Wembley.