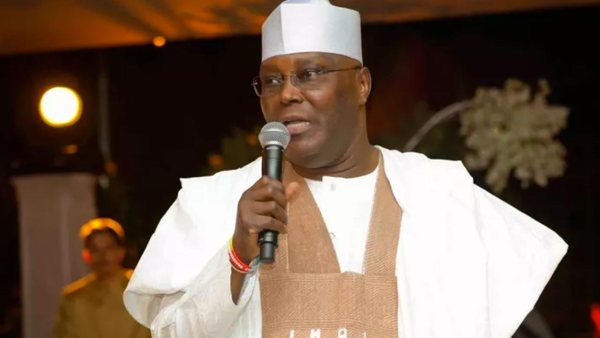 Former Vice President, Atiku Abubakar, on Sunday said Nigeria’s unity, stretched to a new frontier, should never go back to its original dimension.

Abubakar, in a statement he issued in Abuja, said that Nigerians must grow in unity, glow in community, and must blow away disunity.

“We have no choice, considering the alternative, which is a calamity that we would not wish to return to.”

According to the former vice president, a true Nigerian is one who is committed to the idea of the indivisibility of Nigeria.

He added that a true Nigerian is also a person who is always respectful, even if he disagreed with issues and the differences that exist within the nation space.

He said that such a citizen will also respect the right of others to coexist with him irrespective of religious, regional or ethnic differences.

He said that the major challenge facing Nigeria today is that the citizens are drifting, not just politically and economically, but also drifting apart from each other.

“I have often said that the difference between us is not North and South, but between good and bad.

Abubakar said that he believed that all those who believe in Nigeria should stand up to be counted.

He said it was un-Nigerian to terrorize fellow citizens or abduct people.

He said that about a decade ago, such was not the case, adding that it is undoubtedly a new menace that had low historical precedence in Nigeria.

He said if at the national level, Nigeria addresses those un-Nigerian tendencies immediately and dispassionately, the country would not have Nigerians congregating at a regional or sub-regional level to address those issues.

He said the country’s present challenges called for concentration and not fragmentation.

“We must concentrate and focus our national willpower and resolve towards fighting these un-Nigerian tendencies.

“Governors representing some states have met. And I completely understand the necessity of their meeting and the wisdom of their decisions.

“But no matter how much you try to clap with one hand, the vibrations will not be the same as when you clap with two hands.

“We have a national challenge. And as Albert Einstein said, “We cannot solve our problems with the same thinking we used when we created them.”

“For too long, we have erroneously thought that the power to make effective changes lies at Aso Rock.

“But without the states, nobody can get to Aso Rock. That is why for anyone to emerge as President of Nigeria, he or she must secure enough votes in two-thirds of the states that make up the Nigerian federation.

“Let us apply this wisdom to our present challenges.”

“Meet together. Talk together. Come up with the solutions to all our collective challenges.

“And then go back to your states, and consult with your federal and state legislators, with a view to getting them to work with their colleagues to implement the solutions you came up with.

“That is how to save Nigeria.”

He said that according to Einstein: “Those who have the privilege to know to have the duty to act.”

Abubakar said that Nigerians did know that the governors knew that all is not well with Nigeria.

He said that was why they had been meeting, at regional and sub-regional levels.

“That knowledge comes with a duty to act and to act together. Because if we do not act together, then the alternative is that we fall asunder. And God forbid that should never be our fate.”

Abubakar said the country must be mindful of the fact that one in four Africans is a Nigerian, one in seven Black people on Earth is Nigerian.

“Therefore, being so centrally placed by God, it ought to be clear to us that it is our duty to be a beacon of light to the Black World.

“If we succeed as a nation, our successes will resonate beyond our borders.

“It will give hope to the Black Diaspora and increase the standing of Black people all over the world.

“Too much is at stake. We are too centrally located to be dislocated. Together we must win forever.”

He said that Nigerians were far too interconnected to be disconnected.