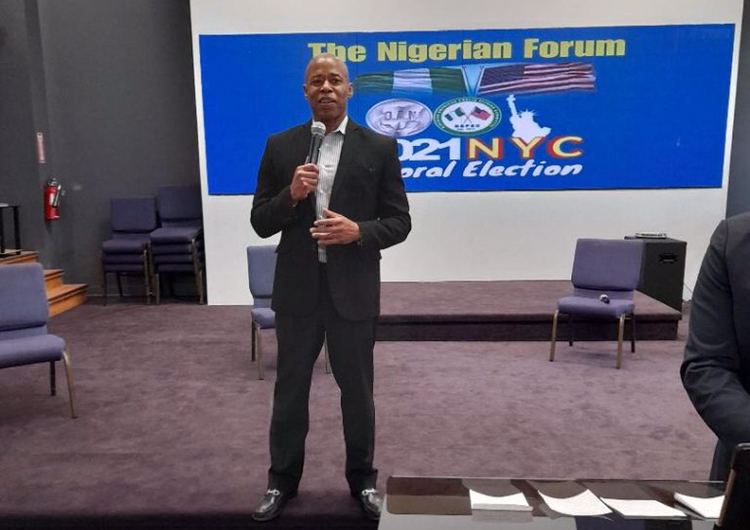 Eric Adams, a leading New York City Mayoral candidate, has assured the Nigerian community of a place in his government if elected the mayor in November.

Adams gave the assurance in an interview with the News Agency of Nigeria (NAN) in New York on the sidelines of a debate convened by The Nigerian Forum.

The forum is a coalition of the Organisation for the Advancement of Nigerians (OAN) and the Nigerian-Americans Public Affairs Committee (NAPAC), a political action committee.

“You are going to see yourselves in my government. It is time to tear down those barriers and walls that prevent you from being decision-makers.

“We’re going to empower your non-profits so that outsiders wouldn’t come in your communities and deliver services.

“You know what your communities need. I’m going to empower you with resources so that you can provide the services that are needed.

“No more are we going to allow others to build up our community. This is our opportunity.’’

Adams, who is contesting on the platform of the Democratic Party, said he had been to Lagos and other parts of Africa helping the people.

According to him, he knows exactly how it feels to be a Nigerian or an African living in the U.S.

“To my brothers and sisters from the Nigerian community, this is an important moment for you.

“You have to ask yourselves, people are now coming to you to support them but where were they when it was time to deal with serious issues in this community?

“I don’t have to introduce myself to you. I’m just saying hello to good friends. I know what it is to be in Lagos helping young people learning the skill sets and opportunities.

“I know what it is to be on the continent of Africa.

“This is an opportunity for one of your own to become the mayor of the city of New York.

“We are going to do real partnership with good and services; US$ 22.5 billion budget for your small businesses to operate.’’

The New York City mayoral election is very competitive and strategic due to the city’s diverse nature and an annual budget of about US$100 billion, the largest municipal budget in the U.S.

The News Agency of Nigeria (NAN) reports that no fewer than three Nigerians are contesting in the city council’s elections.

The Nigerian community is therefore positioning itself as an organized and important voting bloc that has enough weight to pull support for a candidate whose agenda resonates with the community.