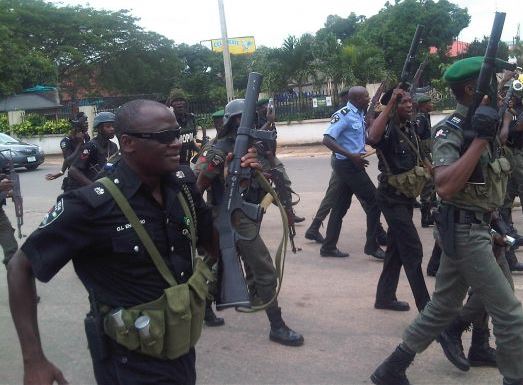 Operatives of the Intelligence Response Team of the Inspector General of Police have arrested no few than seven Newspaper vendors and distribution agents in Imo state.

The police operatives swooped on them on Monday morning at their base located at Number 5 Rotibi Street, Douglas Road, Owerri, as the circulation of the day’s newspapers was on going.

Other vendors and distribution agents who ran away, told Journalists that the gun welding police operatives accused them of circulating Newspaper publications that had stories on the proscribed Indigenous People of Biafra and that were “anti- state.”

One of the vendors who escaped the arrest said” as we were circulating our newspapers for the Monday edition, policemen putting on jackets that had IRT inscription swooped on us and started arresting us. The ones they took away were the ones that had Newspapers that had IPOB stories and the ones they said were againt the Government.”

Some of the vendors and distribution agents the IGP’S team arrested were, Nnamso Okoro, Nelson Enyiama, Blessing Isinwa, Onyebuchi Iwundu and Michael.

Our correspondent recalls that the state circulation manager of the New Telegraph Newspaper, Chuks Ugwuibe, is still being held in an undisclosed security facility after he was arrested in Orlu on Tuesday last week by security operatives while taking his weekly returns from vendors.

The arrest of the Newspaper vendors and distribution agents elicited reactions as residents of the state asked the Government to stop clamping down on the press.

The arrest also affected Newspaper circulation in the state on Monday as the other vendors and distribution agents fled over fear of being arrested.

At the Government House Roundabout in Owerri, a popular place people gather to read Newspapers and analysis issues, our correspondent saw people fuming and calling on the Government to stop gagging the press.

One of them said ” do they think that arresting vendors and distribution agents and Journalists will stop us from knowing the truth.

“Insurgents have taken over LGAs in Bauchi, Zamfara, Niger and Nasarawa states and they are about entering Abuja and the only response this clueless Government has is to arrest vendors and distribution agents. Very soon they will start arresting Journalists but that will not solve the problem. Government should be proactive not this petty approach.

When contacted, the Commissioner of Police in the state, Abutu Yaro, said that the operatives were not from his command.

Our correspondent contacted the Forces spokesperson, Frank Mba, but he promised to get back to him, but he had yet to do so as of the time of filing this report.