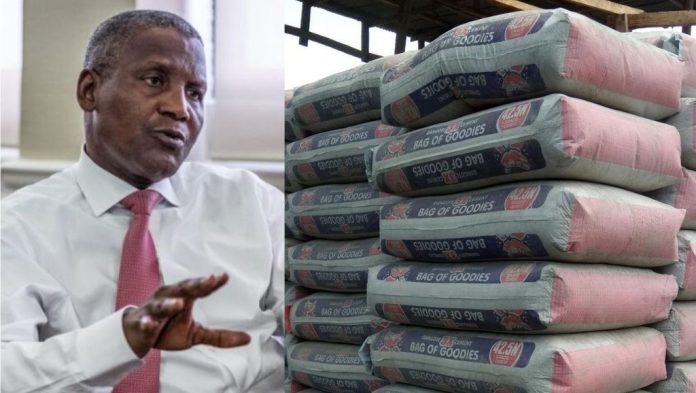 Nigeria’s leading cement maker, Dangote Cement Plc will pay N40.39 billion in taxation to the nation’s treasury from its operational result in the first quarter of 2021, the company said.

In a statement, the cement manufacturer cited its published financial result on Friday, April 30, 2021, stating that the amount is due from corporate tax for the period ended March 31, 2021.

Dangote Cement currently pays over N240 million Value Added Tax (VAT) daily to the government, making it one of the biggest private-sector taxpayers, it stated.

According to the company, it opted to provide funding for the construction of major roads in Lagos and Kogi states.

“The roads are the critical Lagos Apapa Port road leading to the old toll gate and the Lokoja-Obajana-Kabba road straddling Kogi and Kwara states.”

According to the report, the company ramped up production capacity in the Obajana Line 5 and resumed production at the Gboko plant to meet rising demands.

The firm also increased the total volume of cement sold in Q1 2021 from its Nigerian operations to 4.9 metric tonnes (MT) compared to the 4MT sold in Q1 2020.

Its pan-African operations sold 2.6MT of cement compared to 2.3MT in the first quarter of last year.

Commenting on the financial result, Dangote Cement GMD/Chief Executive Officer, Michel Puchercos, said the company started the first quarter of 2021 on a positive note with N89.7bn profit after tax.

“We took the strategic decision to pause our clinker exports to ensure we meet the rapid volume growth in the Nigerian domestic market.

We are improving the output of our existing and new assets and aim to recommence clinker exports in the second quarter.

“Our Pan-Africa operations have reached new heights, with an EBITDA margin of 25.5 per cent and volume growth of 12.8% reported during the quarter.”