The protester who ran onto the field during a World Cup match carrying a rainbow flag and wearing a blue Superman T-shirt with messages in support of Ukraine and Iranian women was banned Tuesday from attending any more matches during the tournament in Qatar.

The World Cup organizing committee said in a statement that “the individual involved was released shortly after being removed from the pitch” and that his embassy had been informed.

“As a consequence of his actions, and as is standard practice, his (entry permit) has been canceled and he has been banned from attending future matches at this tournament,” the statement said. 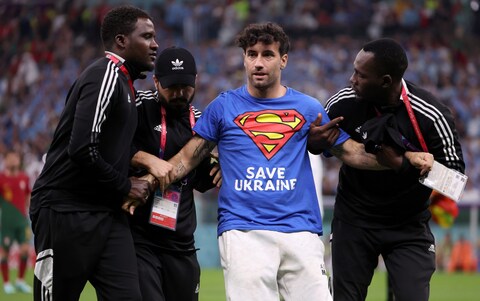 The protester identified himself on social media as Mario Ferri, an Italian who has carried out similar stunts at soccer matches before.

Ferri ran onto the field in the second half of Monday’s match between Portugal and Uruguay carrying the rainbow flag.

Security officials chased him down and Ferri dropped the flag on the field before he was escorted away.

Ferri wrote that he has friends in Ukraine who are suffering and that he spent a month in the country as a volunteer after Russia invaded the nation in February.

In the days ahead of the opening games, the captains of seven European teams were prohibited from wearing multi-colored “One Love” armbands during World Cup matches in support of of LGBTQ rights. Homosexuality is illegal in Qatar.

Some fans also complained they weren’t allowed to bring items with rainbow colors into stadiums.

Ferri said that prompted him to protest.

“FIFA banned the captains’ rainbow armbands and the flags for human rights in the stands, they banned everyone, BUT NOT ME,” Ferri wrote, adding “like a Robinhood 2.0, I brought the message to the PEOPLE. We want a free world that respects all races and ideas.”

Ferri said that police held him for about an hour after the incident and treated him well. He said FIFA President Gianni Infantino helped he secure his release without any penalties, except a ban from watching any more World Cup matches.

“But even for that there’s a solution. I’ve prepared some magic for tonight,” Ferri said in an Instagram recording, without giving details.

Ferri has interrupted several matches before. He said Infantino recognized him from running onto the field at World Cup matches in South Africa in 2010 and Brazil in 2014.