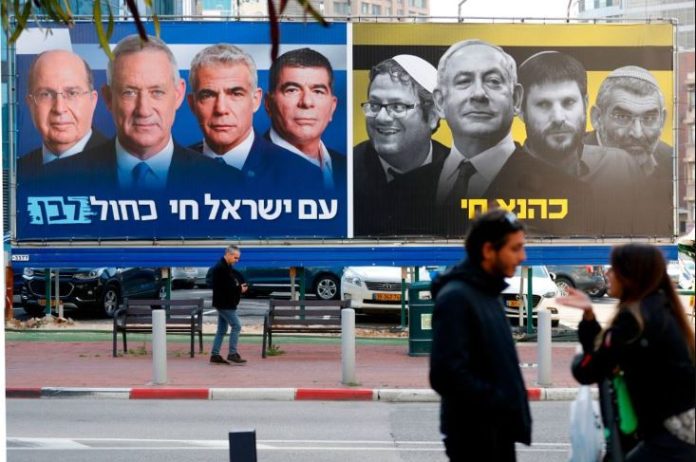 Israel election; For far too long politicians have used violent language against opponents, and now the beast might be too big to contain

So in a later interview with Channel 7, he chose his words with precision to catch the necessary attention.

“I come back together with the Likud; this time we’re going to crush the left with full power,” the veteran politician and former minister of communication said.

The verb he chose literally means in Hebrew “run the left over,” as in a car-ramming attack.

Despite the effort to stand out to make it into the highly populated Likud list for the November polls, Kara’s choice of words did not seem to have enough punch. Someone before him had already used similar words and even went a step further.

“We will break the bones of the left when we return to power,” vowed Likud MP David Amsalem in a Kan Radio interview last month. He later clarified he was referring to politics and wranglings “in Knesset committees, the plenum”.

His words may be a promise to some, but a threat to others. In another lengthy talk with many participants on a Twitter Space audio meeting, he vowed to crush (run over) the High Court that he nicknamed a “mad gang”.

Is this rhetoric ugly and brutal? Yes. But more so, it is plain dangerous.

In a country where violent protest ended in a killing of a prime minister, Yitzhak Rabin, the Israeli public knows that words kill. They are the trigger of the gun that shoots.

Netanyahu condemned the letters and vowed to expel the 65-year-old from the party if she was proven to be guilty. The right-wing activist denied sending the letters, which included threats to the safety of Bennett, his wife and his son if he did not resign.

A few weeks before she was arrested, she referred to Bennett on Facebook as a “murderer” and “traitor” and announced she “would be happy” to see him and the current prime minister, Yair Lapid, die of Covid-19.

Death wishes were not reserved for them only. In September 2021, Hania was filmed calling on New Hope MP Benny Begin, a former Likud member, to drown himself in the ocean

Sin and punishment. The sin: they all helped to remove Netanyahu from office; the punishment: was death.

This phenomenon is not entirely new. It is just getting worse and more perilous as the November elections, the fifth in just over three years, approach.

According to Israeli Channel 12, police have set up a special investigations desk to monitor statements on social media regarding the elections and collect intelligence on organisations with intentions to hurt politicians in public events.

This drastic step is based on police estimates that the upcoming election campaign will be accompanied by unprecedented radicalisation in social media discourse, one that may turn into attempts to physically hurt politicians or political activists.

After all, not all citizens understand poetic metaphors like “break their bones” and could be compelled to act upon it.

Gone are the days when a late Likud activist by the name of Gaston Malka made it into the pantheon of Israeli election campaigns for his antics – namely when, out of anger, he dared to flip the table at a Likud party gathering in 1986.

He became a household name afterwards but since then, Israeli society – young and old – has become dangerously violent. On social media, off social media, in the streets, and at demonstrations. Everywhere.

The Knesset, the Israeli parliament, has never been this savage, and not just verbally.

Probably no Israeli who even occasionally watches scenes from parliament can recall one non-violent session.

There is almost always an altercation, a trade of physical threats, and the presence of bodyguards around MPs.

Over time, the phenomenon has been normalised as background noise that is hardly noticed.

‘The enemy is he who thinks differently’

On the walls of the Stasi Museum in Berlin, the former headquarters of East Germany’s state security services, hangs a framed slogan: “The enemy is he who thinks differently.”

It now applies to Israel as well, though with a slight variation. The enemy is not he who thinks different, since a large majority of Jewish Israelis think pretty much the same; the enemy is therefore he who votes differently. More specifically, he who is anti-Bibi, regardless if they are left or right.

The list of headlines announcing increased security measures by the Shin Bet, Israel’s internal security agency, for ministers and MPs of the ruling coalition is endless.

It happened to all Yamina representatives, Bennett’s right-wing party, in May last year following death threats on social media.

The threat level against them was elevated to level five, the second-highest, after they dared to challenge Netanyahu’s rule and form an alternative coalition.

Then it took 14 heavily armed guards from the PM’s special unit to accompany Minister for Regional Cooperation Esawi Frej, an MP from the left-wing Meretz party, on his visit to the occupied West Bank in January against the backdrop of growing settler violence.

“I got my regular share from those who wish me dead on Facebook,” MP Mossi Raz, also from Meretz, told Middle East Eye.

“Over the last year, the real victims of outrageous incitement were the ‘new leftists’ – Yamina and Gideon Saar’s New Hope parties, those who challenged Netanyahu [from the right].”

Social media plays a pivotal role in igniting violence but it is not the only factor.

There is constant ethnic tension between Sephardi and Ashkenazi Israelis; there is national tension between Jewish and Palestinian citizens of Israel. Hate is in the air, used and abused.

In an attempt to recruit a new campaign advisor for the March 2020 elections, Netanyahu’s close friend and advisor Natan Eshel was recorded explaining to his colleague that the job is easy – it thrives on hate.

“Hatred is what unites our camp,” he was heard saying in a leaked recording. “They call them the non-Ashkenazi… they hate everything.”

Eshel is still a close ally to Netanyahu, and hate, as a ruling sentiment, prevails.

Truth be told, hate is not reserved for one camp only.

In a TV interview in March, secular right-winger Avigdor Lieberman, an opponent of Netanyahu, said he would “take Netanyahu with the ultra-Orthodox community on a wheelbarrow to the nearest garbage dump”.

Before the finance minister hated the ultra-Orthodox community, he wholeheartedly hated Palestinians. He still does, but hating the Orthodox is more constructive in the current political climate.

A popular broadcaster with Radio 103, Nathan Zahavi, put up a Facebook post on 3 July in which he hoped that Channel 14 studio “would burn down with everybody in it”.

While hate is mutual, however, violence is not.

The bullet – the one that kills (Rabin) and the one that serves as a menace (Bennett) – finds its way from the right.

The effort to create a symmetry of violence between left and right is simply not true.

Netanyahu himself has lost control over this unleashed beast, especially ahead of the Likud primary elections which are expected sometime in August.

The candidates now have to persuade party members to vote for them, and the more brutal your words are, the better.

The special monitoring police unit is thus a timely decision, though not necessarily effective in times when the police themselves are often perceived as an enemy.

According to political sources, this is not good news for Netanyahu.

To reach the much-coveted threshold of 61 seats that would allow him to form a government (something he failed to do in the former three rounds), he needs to lure back those who in the previous round opted for Bennett and Saar.

They are right-wingers with a different concept of statehood.

They might dislike the left but do not want to break bones; they might even want to change the legal system in Israel but do not threaten to fire the attorney general if they are disobedient.

So Netanyahu may prefer to present the other, more restrained Likud, at this point, a mission that might prove to be difficult to accomplish.

It is much easier to unleash the beast of incitement and hate than to control it.

Police intervention might thus be much needed in a country where elections feel like another form of a civil war.