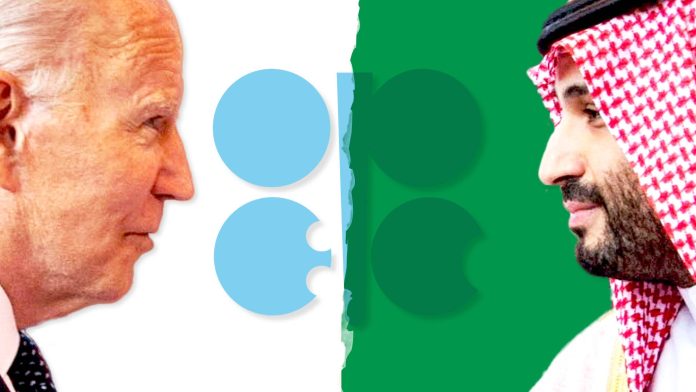 After OPEC’s decision to cut oil production, a war broke out between the US and Saudi Arabia and now this Saudi-US war has reached the Arab League.

The official spokesman of the Secretary General of the Arab League, Ahmed Aboul Gheit, announced this Friday that the organization condemns the negative media attacks against Saudi Arabia following the OPEC Plus group’s decision to cut part of oil production.

The spokesman said: These statements are far from reality and are based only on the politicization of purely economic decisions. Everyone knows that such decisions are necessary for the stability of the world economy due to the serious economic challenges.

Aboul Gheit appreciated the balanced approach of the Saudis to stabilize the oil markets and the decisive and principled positions of the Saudi Kingdom towards regional and international political issues.

It was last week that the OPEC+ organization announced that it will reduce its oil production. Following the announcement of this decision, US President Joe Biden in an interview with CNN said that this action will have consequences for the relations between Washington and Riyadh.

Financial Times describes the OPEC+ decision to cut the oil production an oil war against America.

In response to these statements, the Ministry of Foreign Affairs of Saudi Arabia issued a statement and announced that it rejects any statements about Riyadh’s side in international disputes after OPEC+’s decision to reduce oil production because it is not based on reality and OPEC+’s decision are being taken by all member countries of this organization.

“John Kirby”, the spokesman of the National Security Council of the White House, also said on Thursday, referring to the differences between the United States and OPEC+ over the reduction of oil production: “We do not agree with OPEC+’s statement that this decision was made only for economic purposes. In recent weeks, Saudi Arabia had publicly and privately conveyed the message to the United States that it intends to reduce its oil production. We know this would increase Russia’s profits and reduce the impact of sanctions. This is a wrong path.”