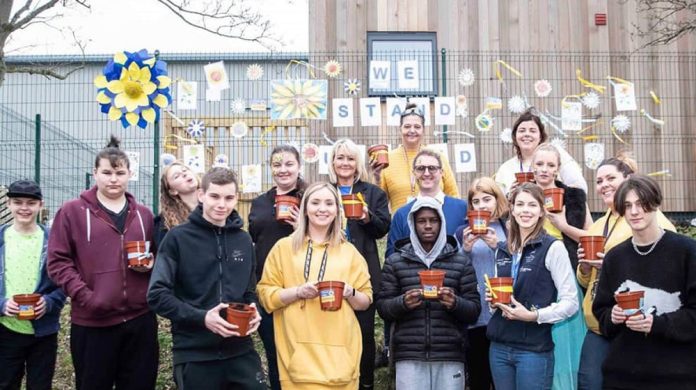 Schools in Britain have been clamping down on protest in relation to Palestine, yet they have been actively encouraging support and solidarity for Ukraine, even fundraising to purchase weapons for Ukraine.

In a blow to free speech, a high court judge, Dame Beverly Lang, recently allowed the Department of Education to continue its clamp down on Palestine Solidarity in British schools after denying permission for a judicial review brought by human rights group, CAGE.

The legal challenge was in relation to a discriminatory letter sent to schools by the then Education Minister, Gavin Williamson, which gave instructions to schools on how to present the occupation of Palestine and recommended schools work with three specific organizations to deliver a “balanced presentation” of the issue.

Read More: Bachelet: Denial of visas to UN human rights staff in Palestine is part of…

As this program pointed out some months ago, none of the three organizations provide balanced or truthful accounts of the occupation of Palestine. In fact, every one of them has a covert Zionist agenda.

“Solutions Not Sides”, which is a project of “One Voice”, a group set up by prominent Zionists. Our research shows that multiple staff members have previously worked for the Israeli regime, including for the occupation forces. Some worked in Zionist intelligence, others worked for Israel at the same time as working for “One Voice”.

The Forum for Discussion of Israel and Palestine is a group pushing a Zionist narrative, set up by an organization called “the Council of Christians and Jews”. This is a long-standing pro-Israel grouping, which has overlapping personnel with FODIP, though they claim to be independent.

“Community Security Trust”, a group that claims to combat anti semitism in the UK, but which purposely blurs together anti Semitism and anti Zionism in pursuit of Israel’s foreign policy objectives. Its charitable objectives include combating extremism; however, its founder the convicted fraudster, Gerald Monson, has a record of funding extremist Zionist groups, such as Chabad, through his family foundation.

It seems that bias in favor of the racist ideology of Zionism is regarded as acceptable in schools, whereas standing up for Palestinian rights is not.

CAGE found multiple cases where school kids have been punished, disciplined, or prohibited, even from the mildest display of solidarity with Palestine.

These include a school that banned the colors of the Palestinian flag, or any clothing resembling Middle Eastern clothes.

The student who was referred to PREVENT after emailing videos of Islamic lectures to his school to express his unhappiness at a one-sided presentation on ISRAEL PALESTINE.
The students who were suspended for wearing a Palestine badge to school, or for discussing Palestine.

In response to the judge’s decision on the letter from the Education, Secretary CAGE released a summary of responses to a survey on Ukraine. This shows that, just like the support for Zionism, most schools have been supporting the NATO proxy war in Ukraine.

With schools bedecked with Ukraine flags, and fundraisers openly supported by schools. Of course, the idea of raising money for Palestine is regarded as controversial and students are disciplined for raising the issue.