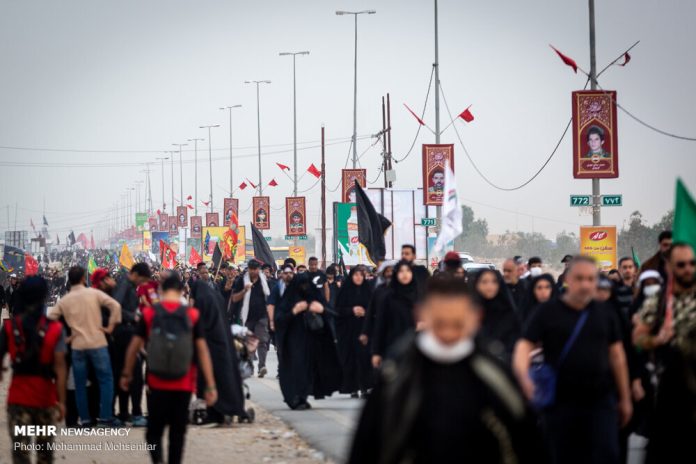 Every year Arabian Walk is organized on the second month of the Islamic calendar i.e. 20 Safar. It is also known as the Million March. In this ceremony, large numbers of people, Muslim or non-Muslim, from all over the world gather to take part in a symbolic walking tour in Iraq.

More than 20 million people from around the world have made their way to the city of Karbala in Iraq, some by air and some by road, to mark the 40th day after the Day of Ashura, the day Hussain ibn Ali was killed in the Battle of Karbala.

Who is Hussain; Why do millions pay homage to him even today?

Hussain ibn Ali was a 7th century revolutionary leader who stood for social justice against the oppressing ruler Yazid. Yazid was a corrupt ruler who was violating the basic rights and dignity of the people.

Hussain witnessed the basic rights and dignity of his people being violated, and good values from his society being drained. Yazid ruled with an iron fist, and demanded Hussain pay him allegiance to lend credibility to his own rule.

Hussain had to make a decision… Should he give his oath of allegiance to a tyrant – and stand aside as the people were being oppressed? Or make a stand and risk his own life? The timeless words of his grandfather Muhammad echoed in his heart, and Hussain knew what he had to do: “The greatest stand is to speak the word of truth in the face of a tyrant.”

Through this tragic end but heroic act of sacrifice, Hussain was ultimately victorious. His death became the catalyst for revolutionary change and led to the collapse of Yazid’s tyrannic rule. Hussain stood by his principles till the very end, and his legacy continues to inspire millions around the world.

From civil rights leaders to volunteers at local charities – people across the world are inspired by his selflessness, courage and determination.

The word ‘Arbaeen’ translates to forty (i.e.; fortieth day). The traditional period of mourning in Islamic culture is forty days. As such, millions of people around the world mark the Day of Arbaeen by remembering the story of Hussain, his family and his companions.

Arbaeen is commemorated by millions of Muslims, predominantly Shia but interestingly also those belonging to other Islamic sects and religions.

Over many centuries the shrine of Hussain ibn Ali has been expanded and renovated to accommodate the growing number of visitors. The visits increase at the start of Muharram and hit their peak on the day of Arbaeen as many set the objective to visit the shrine by then.

The aim is to reach the shrine by the day of Arbaeen. Muslims from Europe, the Americas and Australia will fly from their hometowns to Iraq and do the walk. Many will fly out to Najaf, the resting place of Ali ibn Abi Talib (Hussain’s father), and walk from Najaf to Karbala. This walk will take between three to seven days.

The furthest known distance people walk from is Ahvaz, Iran (over 550km).

The walk to the shrine is inspired by centuries-old tradition, started by Jabir ibn Abdullah, a companion of the prophet who lived long and was the first to pay a visit to the grave of Hussain ibn Ali.

Many Muslim empires such as the Ummayads, Abbasids, and even contemporary regimes such as Saddam Hussain and ISIS have destroyed or threatened to destroy the shrine Hussain ibn Ali. Saddam Hussein even banned the walk yet people would perform the walk secretly. After his downfall, the walk became mainstream and labeled “the walk of the free,” a symbol of the victory of good over tyranny, much of the stance like Hussain ibn Ali in Karbala.

In more recent times, only Covid-19 has disrupted the Arbaeen walk. Today, yet again millions of people have made their way to Karbala, without any threat.

In 2017, 13.8 million people visited Karbala and the shrine of Hussain ibn Ali for the Arbaeen pilgrimage, making it the biggest annual pilgrimage in the world.

In 2018, more than 20 people participated in Arbaeen

After two years of restrictions of Covid, the pilgrimage of 2021 saw an estimate of 16.3 million visitors – all fed and housed by the generosity of the Iraqi people for free.

Reportedly, this year 800 flights are landing in Najaf each day, while according to the foreign ministry of Iraq, this number was only 150 in 2021. Every hour 32 flights are lading in Najaf to make their way to Karbala on Arbaeen.

This year, a record-breaking gathering of more than 25 million people have entered Iraq, making it the largest annual peaceful gathering in the world.