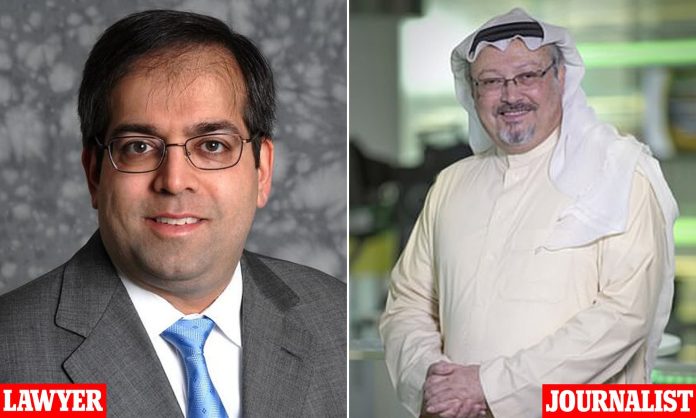 Asim Ghafoor, the former lawyer of slain Saudi journalist Jamal Khashoggi, has left the UAE after his jail sentence for money laundering was overturned.

The former lawyer of slain Saudi journalist Jamal Khashoggi has left the United Arab Emirates for the US after his jail sentence for money laundering was quashed, his lawyer told AFP Saturday.

Asim Ghafoor, a US citizen who has worked on a number of national security and terrorism cases, has paid a five million dirham ($1.4 million) fine, his lawyer Faisal Gill said.

“He’s on his way to the US,” Gill said, adding that he was not facing any charges in the US.

Ghafoor was jailed and fined last month after his arrest, reportedly while transiting Dubai airport.

The court rescinded Ghafoor’s three-year jail term but raised the three million dirham fine against him to five million dirhams and ordered his deportation.

Ghafoor runs a private law firm and is a board member of Democracy for the Arab World Now, or DAWN, a rights group founded by Khashoggi that called for the lawyer’s release in July.

He has defended businesspeople, charity leaders and institutions against allegations of involvement in the 9/11 terror attacks in the United States, according to DAWN’s website.

Khashoggi was murdered by Saudi agents in Istanbul in 2018, an incident that triggered international condemnation and cast Saudi Arabia, a close ally of the UAE, into diplomatic isolation.

The case in the UAE followed an “assistance request” from US officials investigating Ghafoor’s “involvement in tax evasion and suspicious money transfers”, WAM said on Wednesday.

In July, the US State Department denied requesting Ghafoor’s arrest and said the case did not appear to be connected to his ties with Khashoggi. The US embassy in Abu Dhabi has not commented.

Ghafoor’s conviction follows a crackdown on money laundering after the UAE was added to a “grey list” of countries under heightened monitoring by the Paris-based Financial Action Task Force in March.