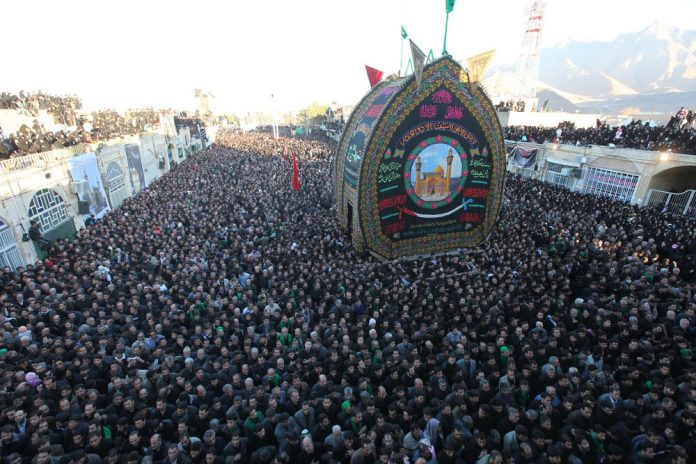 Ambassador of the Islamic Republic of Iran to Baghdad Mohammad Kazem Al-e Sadegh has said that Iran is ready to cooperate with Iraq to hold a magnificent Arbaeen ceremony.

During a meeting with Iranian and Iraqi officials on Friday evening, Al-e Sadegh said that Iran is ready to cooperate with Iraq to hold a magnificent Arbaeen ceremony.

He added that in coordination with the Iraqi government and the Interior Minister, three land borders are currently open for pilgrims to enter Iraq.

Referring to the active borders of Shalamcheh, Chazabeh, and Mehran, he noted that the Khosravi border will be opened until August 13 to reduce the pressure on the Mehran and Zurbatiyah borders.

He noted that Iran will provide 1,000 buses to transfer the pilgrims and at the same time, the Red Crescent is ready to serve the pilgrims.

Pointing to Iran’s full readiness to cooperate with Iraq in holding the magnificent Arbaeen ceremony, he said, “We should try to set up a field hospital in Zurbatiyah as well.”

According to a report, Iranian Health Minister Saeed Namaki and his Iraqi counterpart Hassan Al-Tamimi discussed the formation of a joint committee to hold Arbaeen rituals virtually this year amid the coronavirus pandemic.

The Arbaeen pilgrimage, which is one of the largest religious gatherings in the world, comes 40 days after Ashura, the martyrdom anniversary of Imam Hussein (AS), the third Imam of Shia Muslims and the grandson of Prophet Muhammad (PBUH).

Each year, a huge crowd of people flocks to Karbala, where the holy shrine of Imam Hussein (AS) is located, to perform mourning rituals.

During a meeting held on Thursday, Namaki expressed readiness to fully support the Iraqi government and people in the fight against the pandemic, saying, “Do not hesitate to request help in any time, plus we informed all health experts in the fields of medicine, medical equipment, transfer of knowledge, disease management in intensive care units, the exchange of students and professors to cooperate with Iraq.”

“Due to the reopening [of offices], we suffered from the second peak of the disease, and fortunately, with coherent planning and the use of the experiences of the first peak, we are back to a better condition today, so that the incidence and mortality of COVID-19 in Iran has significantly decreased,” he emphasized.

“Although we have volunteered to buy the world’s first approved vaccine for COVID-19, fortunately, several knowledge-based companies are making vaccines and have passed animal tests, so that in case of any achievement, we will share it with Iraq,” he said.
Media, scholars, and cultural figures of both countries should come together to plan in more detail on mourning rituals of Arbaeen this year, he highlighted.

Al-Tamimi, for his part, expressed happiness to hear good news from Iran about the management of COVID-19 and the reduction of cases and deaths, saying, “We continuously follow the actions of Iran regarding the management of this disease and observe the remarkable success of Iran that taught us lessons.”

“Since the beginning of the outbreak, we have had great success in providing hospital beds, in addition to setting up 50 COVID-19 diagnostic laboratories in Iraq and provided 4,000 ventilators, as well as special drugs used for the treatment of the disease in the world.”

An average of 4,000 people are infected daily in Iraq, 77 percent of whom are recovered, while 10 percent lose their lives, he lamented, expressing appreciation towards Iran’s help in countering the disease.

There would be serious problems in Iraq regarding the fight against coronavirus and the increase in the number of patients, therefore, we have announced to the media the need to inform the citizens about the dangers of the disease and the need for holding the ritual virtually, he explained.

“We need to work together to take preventive action to break the transmission chain of COVID-19 in both countries, he highlighted, concluding that we are always proud to cooperate with Iran.”

Iranian Ambassador to Baghdad Iraj Masjedi has said that Iraq will not allow foreign pilgrims to visit the country for the Arbaeen ceremony due to the coronavirus pandemic.

This year Arbaeen falls on October 8.