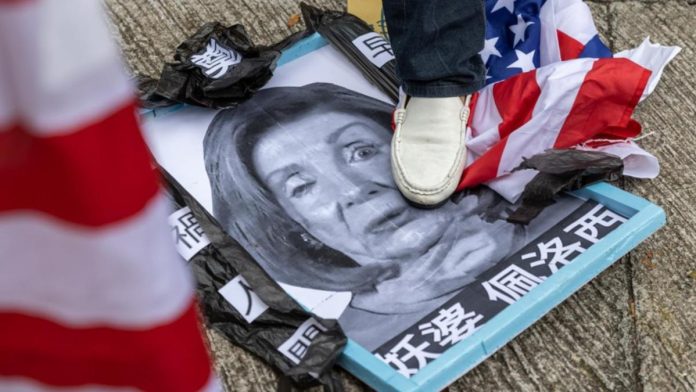 When US House Speaker Nancy Pelosi touched down in Taiwan on Tuesday night, China was ready with its response.

In quick succession, a slew of government and political bodies fired off statements condemning the visit and warning of its “severe impact” on US-China relations, while China’s military said it would immediately launch “air and sea exercises” and released a plan for drills surrounding the island in coming days.

Pelosi’s visit — the first by a top-ranked US lawmaker in 25 years and part of a larger Asia tour — was seen by Beijing as a “major political provocation” and a challenge to China’s sovereignty. China’s ruling Communist Party claims the self-governed democracy of Taiwan as its own, despite never having controlled it.

Despite Beijing’s objections, Pelosi and a congressional delegation embarked on a series of high profile meetings at Taiwan’s legislature and at the office of Taiwanese President Tsai Ing-wen, where the California Democrat said her delegation came to send an “unequivocal message” that “America stands with Taiwan.”

“We want Taiwan to always have freedom with security and we’re not backing away from that,” Pelosi said, praising the courage of the Taiwanese people to uphold democracy.
Pelosi’s defiance of China’s warnings not to visit the island may have aggravated troubled US-China relations, but analysts say the party likely to end up feeling the brunt of Beijing’s pressure is not the United States, but Taiwan.

Beijing wasted no time making its displeasure clear as the US Air Force jet carrying Pelosi’s delegation touched down in Taiwan on Tuesday evening, but its response so far has been more restrained than somwe of the possibilities floated by nationalist voices in China in recent days.

China’s military will run exercises around Taiwan and launch a series of “targeted military operations to counteract the situation,” according to statements released by its Eastern Theater Command and Ministry of Defense Tuesday.

Beijing wasted no time making its displeasure clear as the US Air Force jet carrying Pelosi’s delegation touched down in Taiwan on Tuesday evening, but its response so far has been more restrained than somwe of the possibilities floated by nationalist voices in China in recent days.
China’s military will run exercises around Taiwan and launch a series of “targeted military operations to counteract the situation,” according to statements released by its Eastern Theater Command and Ministry of Defense Tuesday.

An official map indicating the location of some of these planned drills — initially set to run Thursday to Sunday — suggest they are closer to the island than previous exercises — and even encroach on Taiwan’s territorial waters. Analysts say that indicates they are an escalation from previous threats leveraged by Beijing against Taiwan.

The map shows the drills will encircle the island more completely than previous exercises — including the military exercise areas and missile splashdown zones during a major crisis in the Taiwan Strait in the mid-1990s.

With these drills, China has “gone a lot farther than they ever have before,” according to Carl Schuster, a former US Navy captain and former director of operations at the US Pacific Command’s Joint Intelligence Center.

“The geopolitical signal being sent is that China can close Taiwan’s air and sea access whenever it wants,” he said.

But how significant the exercises would ultimately be would depend on what happens in the coming days, according to political scientist Chong Ja Ian of the National University of Singapore, who said much was at stake for China’s image at home and abroad.

“Beijing (does not) want to escalate things in a way it cannot control. At the same time, it cannot send a signal that looks too weak,” said Chong, noting the latter would have domestic ramifications for Chinese leader Xi Jinping and potentially affect Beijing’s ability “to make other regional states toe its line.”

“What that sweet spot looks like (for Beijing) no one really knows,” he said.
‘National humiliation’

But even as China launches its response, Pelosi’s touchdown in Taipei, and her high profile schedule of meetings Wednesday, marked a significant setback for Beijing, which had for days sought to deter her trip with threats of retaliation and warnings about crossing a “red line.”

And disappointment of the failure of those threats was palpable in some circles in China.
However, Hu Xijin, a political pundit and former editor-in-chief of the state-run nationalist tabloid Global Times — who had warned of Chinese military retaliation against the US in the lead-up to Pelosi’s trip — tried to temper any discontent.

“Pelosi landed in Taiwan, which of course reflects that our deterrent power is not enough to stop her early offensive,” Hu wrote in a post on his verified Weibo account Wednesday.

“But if you are very frustrated because of this, thinking that we have ‘lost’ and encountered a new ‘national humiliation,’ it’s a bit exaggerated then. Some individuals can think that way, but we must not have such a collective vulnerability,” he said.

Pelosi’s visit came at a particularly sensitive time for China as Xi, the country’s most powerful leader in decades, is preparing to break conventions and seek a third term at the Communist Party’s 20th Congress this fall. And that raises the stakes of China’s failure to dissuade the speaker from visiting, analysts say.

“The Chinese tried to to use saber rattling and use the rhetorical war in order to deter Pelosi’s trip, and they went overboard with their threats,” said Yun Sun, director of the China Program at the Stimson Center in Washington, pointing to rhetoric in China’s public sphere over potential actions like no fly-zones or even intercepting Pelosi’s plane.

“Now Pelosi decided to have the trip and that leaves the Chinese hanging, because they can’t really deliver,” she said.

This reveals “quite a few problems” in China’s foreign policy, “that they think saber rattling is enough to get them what they want, but the cost of that is their future credibility,” she said.

And while the situation was unlikely to affect Xi’s move into a third term, the visit, especially on the heels of his call with US President Joe Biden last week in which the Chinese leader warned the US against “playing with fire” on the Taiwan issue, was a “major embarrassment” domestically, Sun said.

But while Beijing’s anger was directed at the US speaker — who Chinese officials accused of “knowingly and maliciously” provoking a “crisis” — analysts said Taiwan stands to feel the brunt of its fury.

The planned military exercises, meant to “squeeze Taiwan,” would likely be followed up with continued actions in the Taiwan Strait, according to Sun.

“The Pelosi visit actually will lead to a new escalation of the Chinese military coercion of Taiwan in the foreseeable future. That punishment is the key of the Chinese response at this point, because it cannot punish the United States,” she said.

Taiwan is also set to bear an economic penalty for its actions, with China’s Taiwan Affairs Office on Wednesday announcing a suspension on the import of certain citrus fruits and seafood products from the island.

Chinese Customs in a separate statement pegged the suspensions to hygiene concerns, but it is not the first time China has banned Taiwanese products amid escalating tensions.

China’s Ministry of Commerce also announced Wednesday it would immediately suspend its export of natural sand to Taiwan, a key component for the production of semiconductor chips — a move Taiwan’s Bureau of Mines said would have “limited” effect.

And in the face of China’s plans for military drills, Taiwan’s Maritime and Port Bureau also issued three notices on Wednesday, asking vessels to use alternative routes for seven ports around the island.

Pelosi departed the island Wednesday, leaving a defiant Taiwan under even more pressure as China vents its fury.

When asked during a regular news briefing in Beijing whether the export suspension was meant to punish Taiwan over Pelosi’s visit, China’s Assistant Minister of Foreign Affairs Hua Chunying refused to comment on specific trade actions but said “one thing is certain here.”

“The US and Taiwan separatist forces must take the responsibility and pay the price for the mistakes they made,” she said.