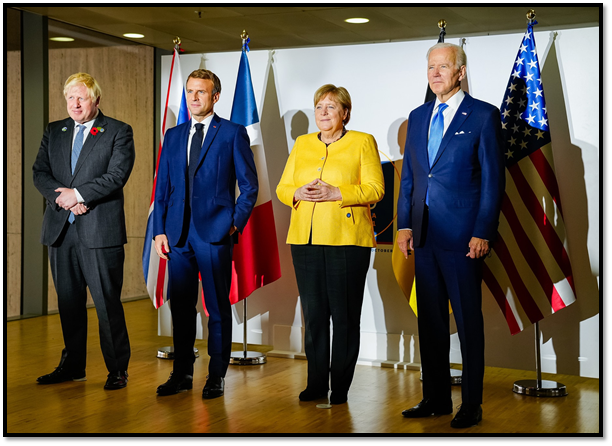 The leaders of Britain, France, Germany and the United States will hold four-way talks Tuesday on Iran’s nuclear program, the French presidency confirmed, with Tehran’s oil exports as one of the issues to be raised.

The talks will come on the sidelines of the G7 gathering of the world’s top industrialised powers, which will also discuss Iran’s nuclear program at a dinner during a session on foreign policies.

Among topics to be broached are the “question of oil” and “a willingness to stop proliferation”, said a senior French official, without giving further details.

Iran “will be raised in the ‘quad’, we have a meeting in this format on Tuesday morning,” added the official.

Iran has among the world’s biggest oil reserves but its ability to sell crude has been hobbled by crippling sanctions imposed over its nuclear program.

European and Asian officials have stated that the return of Iranian oil to world markets will help stabilize oil prices.

It was reported On October 30 2021 that, President Joe Biden and the leaders of Britain, France and Germany said that the 2015 nuclear deal could be restored quickly if Iran changes course. “We call upon President [Ebrahim] Raisi to seize this opportunity and return to a good faith effort to conclude our negotiations as a matter of urgency. That is the only sure way to avoid a dangerous escalation, which is not in any country’s interest” President Biden, Prime Minister Boris Johnson, President Emmanuel Macron, and Chancellor Angela Merkel said in a joint statement on the sidelines of the G20 summit in Rome.

The four leaders also expressed “grave and growing concern” over Iran’s production of highly enriched uranium and enriched uranium metal. “Iran has no credible civilian need for either measure, but both are important to nuclear weapons programs.”

“They are scared,” read a front-page headline in Vatan-e Emrooz, a conservative Iranian paper. The article said that the joint statement included “signs of anxiety” about Iran’s increasing nuclear power.

From April to June 2021, Iran and the world’s six major powers – Britain, China, France, Germany, Russia and the United States – held six rounds of talks on restoring the 2015 nuclear deal. Diplomacy stalled in June during Iran’s presidential campaign and the political transition as Ebrahim Raisi took office and appointed his cabinet in August. On October 27, Iran’s lead negotiator announced a return to nuclear talks with the world’s six major powers by the end of November. The following is the full text of the joint statement by the leaders of Britain, France, Germany, and the United States.

We, the President of France, Chancellor of Germany, Prime Minister of the United Kingdom, and President of the United States, met in Rome today to discuss the risks posed to international security by Iran’s escalating nuclear program. We expressed our determination to ensure that Iran can never develop or acquire a nuclear weapon and shared our grave and growing concern that, while Iran halted negotiations on a return to the Joint Comprehensive Plan of Action (JCPOA) since June, it has accelerated the pace of provocative nuclear steps, such as the production of highly enriched uranium and enriched uranium metal. Iran has no credible civilian need for either measure, but both are important to nuclear weapons programs.

These steps have only been made more alarming by Iran’s simultaneously decreased cooperation and transparency with the International Atomic Energy Agency (IAEA). We agreed that continued Iranian nuclear advances and obstacles to the IAEA’s work will jeopardize the possibility of a return to the JCPOA.

We are convinced that it is possible to quickly reach and implement an understanding on return to full compliance and to ensure for the long term that Iran’s nuclear program is exclusively for peaceful purposes.

Return to JCPOA compliance will provide sanctions lifting with long-lasting implications for Iran’s economic growth. This will only be possible if Iran changes course. We call upon President Raisi to seize this opportunity and return to a good faith effort to conclude our negotiations as a matter of urgency. That is the only sure way to avoid a dangerous escalation, which is not in any country’s interest.

We welcome our Gulf partners’ regional diplomatic efforts to deescalate tensions and note that return to the JCPOA would result both in sanctions lifting allowing for enhanced regional partnerships and a reduced risk of a nuclear crisis that would derail regional diplomacy. We also affirm our shared determination to address broader security concerns raised by Iran’s actions in the region.

We are committed to continuing to work closely with the Russian Federation, the People’s Republic of China, and the European Union High Representative, as Coordinator, in resolving this critical issue.