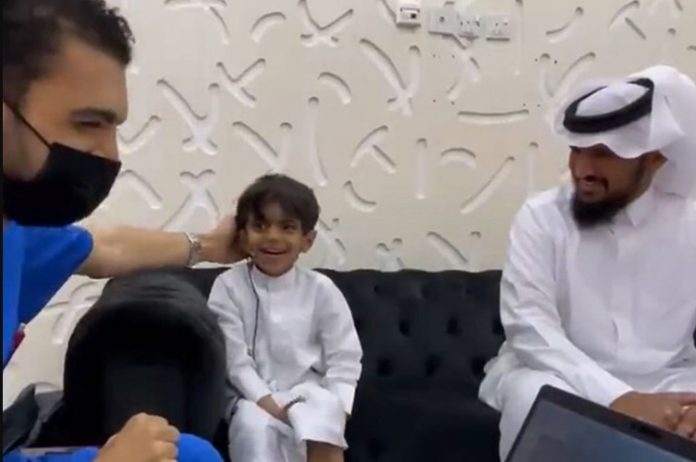 A touching video clip of a Saudi child in a hospital room hearing for the first time after a cochlear implant has won hearts across the globe.

The video of the incident went viral.

The video showed his reaction when he was able to use the sense of “hearing” for the first time.

The child’s hearing has been impaired since his birth.

The Saudi Ministry of Health shared the story of the Saudi child Wajdi from the city of Najran.

The child was reveling in joy when he heard the surrounding sounds for the first time.

The ministry said he had to undergo a cochlear implant at King Khaled Hospital in Najran.

The ministry said the operation was successful.

The child’s relatives were also present.

A video showed Wajdi’s grandfather along with the doctor, who would talk to him for a while and clap in order to test the child’s sense of hearing.

The Najran Health Authority said, “A medical team from the ENT Department at King Khalid Hospital in Nahran performed a cochlear implant for a 4-year-old child. He was suffering from hearing loss.”

The authorities explained, “After completing the necessary examinations, the transplant operation was performed on the child, and the initial response test for the operation was successfully completed.”

The Director-General of Najran Health, Dr. Ibrahim Bani Hamim, said that conducting such specialized operations is part of the performance improvement programs in the region’s hospitals to facilitate the citizens and residents’ access to high-quality treatment services, and to reduce referrals to hospitals and specialized centers.”

A large number of twitter users shared the video.

One of the Twitterati commented: “This clip made my day and filled it with happiness.”

While another thanked the medical team, saying that “there is no greater blessing than hearing and sight.”

Najran governor, Jalawi Bin Abdulaziz Bin Musaed said he would meet the child, his guardian and the medical team responsible for conducting the operation for the child.

Tinubu returns to Lagos, tasks LG bosses to mobilise people to vote for him