Super Eagles stars celebrated the end of the season in Europe with their family. Several Nigerian players participated as action concluded in most European leagues this weekend.

Super Eagles of Nigeria stars such as Moses Simon, Victor Osimhen and Wilfred Ndidi, and Leon Balogun took to social media to reflect on their seasons.

Some of the Super Eagles stars took to social media to celebrate their achievements while others were just glad the season has come to an end.

Here are selected players that reflected on their season below.
Moses Simon
Super Eagles wingman Moses Simon celebrated the Coupe de France title with Nantes on the final day of the season.

The 26-year-old was also celebrated by Nantes after making his 100th appearance for the club.
In a message on his official Instagram account, Simon wrote, “It’s such a great honor to have played 💯 games with Nantes. Big thanks to the coaches, technical staff, players, and fans for all the love and support.

“It was a fantastic season and I’m proud to be part of the historical moment of this great club. Allez Nantes.

READ ALSO: Is Ibrahimovic’s Serie A win at AC Milan worthier than Ronaldo’s title with Juventus?

Balogun was not in action as Rangers lost to Eintracht Frankfurt in the Europa League final.

The 33-year-old bounced backed to play all 90 minutes as the Rangers defeated the Hearts by two goals in the final.

He said, “For me, this is a big milestone! Having gone through a lot of tough times, from multiple injuries and all, I still stood my ground against all odds but I won’t be able to do this thing without the support of my family, friends, fans and of course my teammates, the coaches, I sincerely appreciate y’all.

“This one is also for the people who want to see me fail, y’all motivate me to put a lot of y’all in shame. Ciao and see you next season, god is the greatest🙏🏽we move.”

The Super Eagles star was however able to celebrate the season with his wife and daughter at the King Power Stadium.

Ndidi was all smiles as he had fun with his family while soaking up adoration from the fans. 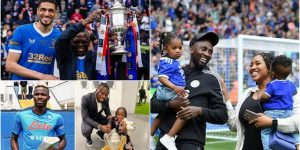