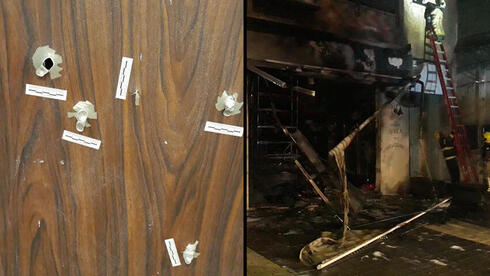 Family members say the the holocaust surviving woman and her caregiver were still afraid after their harrowing experience; police say bullets likely meant for family of local gang leader as part of criminal gangs’ dispute

An unknown assailants fired eight bullets at the door of an 88-year-old Holocaust survivor in Kfar Saba early on Sunday, while she was home with her caregiver.

Israel Police estimated the shots were fired in a case of a mistaken identity.

The Holocaust survivor and her caregiver were not hurt in the shooting, and according to the police, the assailants intention was to harm family members of a local crime gang.

Shortly before the incident, a coffee shop belonging to the same criminal organization was allegedly set on fire following an ongoing gang dispute.

A family member said that the women panicked when the bullets penetrated the door and hit near their beds.

“She’s been through some very difficult things in her life, but this is also very difficult,” the family member said. ” She says that during the shooting, they heard people walking around in the hallway and were afraid to leave the apartment until the police arrived.”